I have chosen not to count how many days it is until I leave the country. Despite the fact that I am more excited than I've ever been in my entire life, I am also more nervous than I have ever been in my entire life. I'm not nervous about Gabs or the placement or the culture shock, not at all actually. What I am shakin' in my shoes about is the travel part of the whole trip. I fly out of Winnipeg at 6:55 p.m. Central Time on May 6th; arrive in Vancouver (don't ask why - because I have no idea why I am flying in the complete opposite direction of my ultimate destination) at 7:50 p.m. Pacific Time; depart Vancouver at 8:40 p.m.; arrive in London's Heathrow airport - one of the biggest in the world at 1:40 p.m British Summer Time- and this, my friends, is where my terror begins; depart London at 7:10 p.m.; arrive in Johannesburg at 6:55 a.m. South African Standard Time; depart Johannesburg at 8:35 a.m.; and FINALLY arrive in Gaborone at 9:20 a.m. Central Africa Time on May 8th. All in all I'll travel through 14 time zones! Can we say JET LAG! Gabs is actually only 7 hours ahead of friendly Manitoba, but travelling to get there is going to be trying to say the least. After all is said and done, my feet will touch Gaborone soil after 36 and a half hours of traveling. Oi! The trip back is practically the same except that I fly through Chicago (not quite as far West) instead of Vancouver. I'll arrive back on Manitoba soil on August 20th at 2:18 p.m.
I'll be in Botswana for 3 months and 3 weeks!

So, readers, the first map, indicated by the red line, shows the approximate distance from my home as I now know it, to my temporary home half way around the world. The second map, as indicated by the red arrow, indicates a little more clearly, exactly where I'll be in relation to the rest of the African continent.
Now that you know where I'll be and how long I'll be there, let me go over a few technicalities that I've experienced and realisations I've come to during my planning process thus far. Leaving the country for more than 90 days makes planning exceedingly more difficult. I had to put in a request for a special Manitoba Health Card, I had to buy private insurance because my extended health benefits at work lapse, and the cost of said private insurance increased significantly due to the 90+ days outside of Canadian borders. With that said, insurance = done!
Other items checked off my to-do list:
Things still on my to-do list:
Posted by ~Brandy~ at 7:36 AM No comments:

Thursday was Doctor Day. $45 for the appointment, $100 for the shots, 3 needles (Hepatitis A and B Twinrix, Typhoid Fever, and Tetanus Booster), two arms that are still a bit sore, and I am almost done the immunization process. I have to get one more dose of the $65 Hepatitis shot before I go and then another one when I get back. Now I'm just waiting to get the final word on whether on not I need to take the Malaria meds or not and I'll be set! While waiting for the pharmacy to fill the required syringes, I stocked up on two forms of Gravol (drowsy and non-drowsy) and Immodium...o the wonders of travelling when one has an anxious digestive system.

Thursday also marked the first day of my first real fundraiser. Out went the Ukrainian Perogy Fundraiser emails and in came the orders. The original plan was to cap the orders at 200 dozen, but when, after only two hours, I had over 100 dozen ordered, Mom and I decided that we'd increase the amount a little. Currently, we are sitting at 217 dozen ordered. Requests have slowed down now and after tomorrow Mom and Baba will have a stock of 100 dozen ready to go. Next weekend I hope to travel home to G.P. to get my fingers involved in the pinching as well.

A few other tidbits...my Leave of Absense has been approved at work. I have to be in Gaborone for orientation on May 9th. I am still working out the end date of my placement. I've gotten in touch with Gillian, a woman who is in Gaborone on an SWB placement right now and she is answering all of my questions! I cannot express how grateful I am to have come in contact with her. She is putting my nerves at ease considerably.

Cheers to needle and perogy pinches!
Posted by ~Brandy~ at 7:57 AM 1 comment:

Where do I Start?

How about the beginning...
I decided that it's high time I get myself out of this country and volunteering abroad rather than simply helping other people do exactly that. At the end of December, I mailed my application to Students Without Borders (SWB) for a placement at the World University Service of Canada (WUSC) Field Office in Gaborone, Botswana. 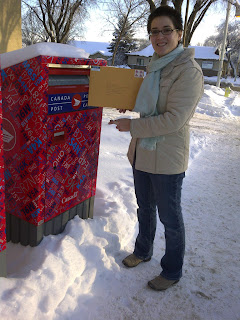 On January 18th (my sister's birthday), I had my phone interview with the SWB staff. On February 7th, I received an email letting me know that I had been recommended to the WUSC Field Office in Gaborone. For the next 24 days, 9 hours, and 37 minutes (I'm just kidding, I don't actually know the hours and minutes), I waited and waited and waited, crazy going slowly the entire time. On March 3rd, I received my acceptance email. At that point, I basically started bouncing off the walls.

As you can see by the date on this post, it is March 4th. I have all of my pre-departure documents sprawled across my living room floor, my doctor's appointment booked for next Thursday, a to-do list that keeps getting longer with each passing thought, and an intense wonderment at how exactly I am going to have $1800 ready for March 21st and then another $2500 ready for April 1st. From this point forward, my life is going to be travelling at the speed of a cheetah!

I suppose you might be wondering what exactly I will be doing in Gabs. Here is the link to the placement description:
Program Assistant-ISM and SWB