Canada Day comes but once a year and typically I have a pretty low-key day that ends with watching some fireworks. This year, since I happened to be in Gaborone, Botswana, unable to fly to Maun to visit a friend due to the high cost, my roommates and I decided to host a Braai 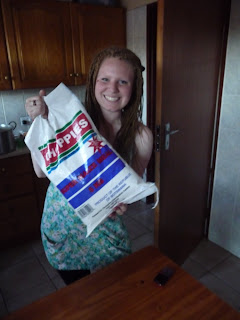 (that's a BBQ, but African-style). In Botswana, July 1st is also a national holiday called Sir Seretse Khama Day. Sir Seretse Khama was the first president of Botswana after the country got its independence from the British. It worked out wonderfully because all of our Gaborone friends were free as well. The only hiccup we had was failing to purchase enough alcohol the day before and then struggling to find an open liquor store on the holiday. But try we did and successful we were!
So, basically a braai consists of a large quantity of people, loud music and various dance moves, and one huge pile of food - none of this Canadian-style hot dogs and hamburgers, but heaping piles of steak, sausage, chicken and all the fixings which included pap (a maize meal type porridge, but thick like mashed potatoes), chakalaka (a spicy vegetable relish and what our Batswana friends call salad), and samp (a mixture of dried corn kernels and beans that take forever to cook). 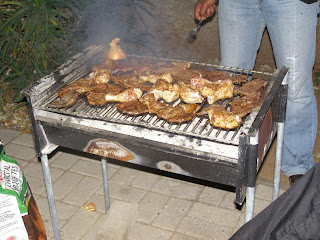 In addition to all of that, us Canadians decided to add chili and lasagna (two things you can't really get here in Gabs). We also had buns to go with the chili. Sound like a lot of food? It was, but it all got eaten! The picture above is Emma holding the 5kg bag of pap. I think we likely cooked about half of that bag leaving us with quite a bit leftover. Besides that pap and a bit of chakalaka though, every morsel of food got devoured. The photo to the left is one round of meat on the grill. I think we had about three total. Here us Canadians were thinking we had entirely too much food, but boy were we wrong! People who showed up later missed out on the delicious grub.
We celebrated Canada Day with our Batswana, American, German, and Irish friends! Emma brought temporary tattoos with her from Canada which were a hit. Almost everyone at the party left donning a maple leaf, a Canadian flag, or simply the word 'Canada'. 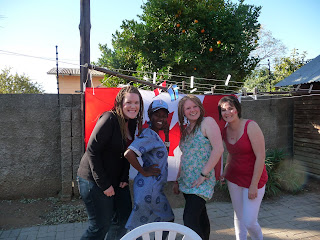 In the photo above is Angela, Tshepiso, Emma, and yours truly in front of our nation's flag. Note the smaller Canada and Botswana flags as well. It was a perfect day with great weather, friends, and food.
And now I must add one final photo - Angela's marvelous jello shots made inside oranges! It was quite a process to make them and we spent most of the day leading up to the braai worried that the jello wouldn't set, but it all worked out. Aren't they ab fab?! We thought as much and so did all of our guests. 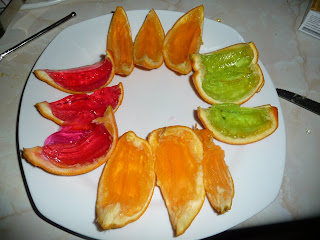