5 Reasons I'm Damn Fine and Why You Can't Have Any, Unless...

I wish I made the time to blog more, I really do. What I do find at least some time to do is follow other bloggers. After reading Marjorie McAtee's (don't call her Marge) "5 Reasons I'm Smokin' Hot and Why You Can't Have Any", I knew I had to take the time to do a similar post of my own. So, here it is...
Reason #1: I'm an English Honours Student a.k.a I'm damn smart! 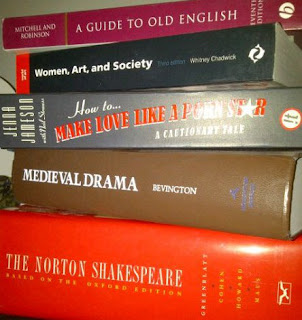 I'm not just your typical undergraduate. I've been doing my degree part-time while working full-time for six years now (this is my last year). What I'm saying is, I work my ass off. The 'honours' part of my degree means I'm one of the smart kids. The highest my GPA could be is a 4.3. Mine's 3.85.

This also means that I read (a lot) and write (a lot). I either have my nose in a book or my fingers to a page...sometimes it's both, as in simultaneously (that means at the same time).
Why You Can't Have Any, Unless...
This one's really simple; you're just not as smart as me. Physical stimulation is simply not enough for this damn fine chick; I need intellectual stimulation. Unless you can name two Shakespeare plays other than Romeo and Juliet and Hamlet and at least one Jane Austen novel other than Pride and Prejudice, just forget it. Don't bother.
Reason #2: I jog a.k.a I work out!
Anyone who jogs is sexy and they know it, me included. When I jog down the street, pimpin' to my beats, people stop and stare. These are what I jog in. 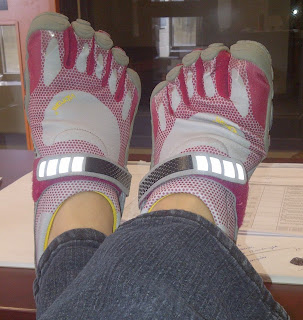 Perhaps not as sexy as, say, animal print pants or a speedo, but pretty damn close. In sun, rain, snow, my Vibrams are on my feet as I jog on by.
Why You Can't Have Any, Unless...
When you walk on by, because I'm sure you don't jog, people don't say 'damn you fly'. My guess is you also know absolutely nothing about Vibrams and why people who are fine, like me, wear them. Unless you're seriously considering participating in at least a half marathon, forget it. You can't keep up.
Reason #3: I piss people off when I stand up for things I believe in a.k.a I'm a passionate bitch!
I only argue when I know I'm right, which is most, if not all, of the time. Actually, I wouldn't even say that I argue, I just state my opinion with every ounce of my being. What makes me even finer is that I'll actually give you the benefit of the doubt and listen to what you have to say. I won't even necessarily disagree with it. Just don't tell me I don't deserve the things I've worked damn hard for. Don't suggest I should just sit down and shut up when I become the voice for those who are unable to stand up for themselves. And for pity's sake, don't give me some half-assed sob story that's supposed to be worse than the stories I've heard from the African refugees I work with. Those things, among others, just piss me off.

Why You Can't Have Any, Unless...
You say 'bitch' like it's a bad thing. You think I'm dramatic. Rather than standing up for what you believe in, you just sit back and hope other people will do it for you. Unless you're going to listen to me and Betty White and grow a vagina (balls are weak and sensitive, vaginas, on the other hand, can take a pounding), fuck off and forget it. You and your baby balls aren't worth my time.
Reason #4: I'm saving the world one day at a time a.k.a I have a huge heart!
I already mentioned the African refugees so now I'll add HIV/AIDS awareness, fair trade promotion, and gender equality advocation. 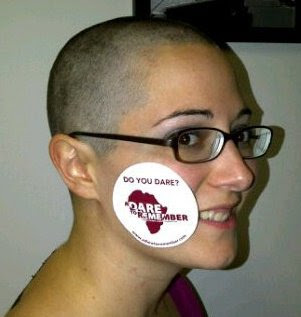 I recently spent four months in Gaborone, Botswana preparing university students for their new lives in Canada. I visited families in rural Botswana who lived fifteen people to a house that was spacially smaller than my living room. I had the opportunity to pay for a tour guide to take me through a 'township' (that's the nicey nice word for a slum) so that I could show the people at home the atrocities that 'people in Africa' had to live through. I also had the opportunity to throw up in my mouth a little bit at the thought of exploiting these people and the way they live so that a fucking tour guide could make more money in an hour than the people in the township make in a year.
Did I mention I rocked a damn fine bald head after raising over $4000 for the Stephen Lewis Foundation?
Why You Can't Have Any, Unless...
I'm a better person than you. In short, ask yourself what you've done in the name of altruism lately? If it took you longer than five seconds to think of something, ask yourself what's wrong with yourself. Also, you likely spent more money on Christmas gifts (one fucking day) than you donated to charitable organisations all year. Unless you're willing to save the world with me by giving of yourself until there's nothing left to give, you're wasting my time. I don't waste time.
Reason #5: I don't believe in monogamy, I've taken lap dance classes, I prefer porn to rom coms!
Ok, so you actually got lucky; I gave you 7 Reasons I'm Damn Fine.
Monogamy is like reading the same book over and over - Mason Cooley. Typically, I don't read books more than once. If I like them, I buy them and put them on my bookshelf to cherish forever, but likely never touch them again. I wonder if I could do that with lovers?! Back to my