Half of a Yellow Sun by Chimamanda Ngozi Adichie

Chimamanda Ngozi Adichie is an author that has been on my TBR list since I first saw her TED Talk. She is so beautifully brilliant that I can't help but quote her: "The single story creates stereotypes, and the problem with stereotypes is not that they are untrue, but that they are incomplete. They make one story become the only story." Beautiful and brilliant, right?!

I was just about to leave a used bookstore empty-handed (I know, that's borderline blasphemous) when I happened upon Half of a Yellow Sun. It hasn't been on my shelf for long, only a couple of months, but I've had Chimamanda Ngozi Adichie on my author list for years. In any case, I'm including Half of a Yellow Sun as one of the books in My Reader's Block's 2015 Mount TBR Reading Challenge. The Book Riot 2015 Read Harder Challenge lists "a book by an author from Africa" as one of its challenges so Half of a Yellow Sun also allows me check that one off the list! Chimamanda Ngozi Adichie was born in Nigeria. 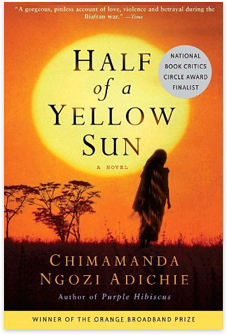 The synopsis on the back of the novel explains that Half of a Yellow Sun "illuminates a seminal moment in African history: Biafra's struggle to establish an independent republic in southeastern Nigeria during the late 1960s." It also mentions that the story is told through five unforgettable characters, and that is true, but while Odinegbo, Olanna, Richard, and Kainene are all integral to the novel's intrigue, the character who had the most profound effect on me was Ugwu. Readers follow Ugwu, a teenage boy, from the poverty of his village home through his employment as a houseboy for university professor, Odinego, and finally to the front lines of the war as a member of the Biafran army. Readers move alongside Ugwu as he learns, loves, and commits atrocities as a soldier.

Half of a Yellow Sun is a story about war, what war does to people, and how it changes people. I'm not going to lie. This book is not easy to read. It's so heart-wrenching in places that I almost had to put it down a few times. Chimamanda Ngozi Adichie's ability to write such realistic, yet fictional, characters is what makes this novel so incredible.

If I have one negative critique it would be the structure of the chapters. Around the middle of the novel, the plot jumps ahead to the late sixties before telling the story of the early sixties. I was confused at first, until I flipped back and then ahead to reassure myself that I had not missed integral details. I think a chronological structure might have been more effective if only to avoid reader confusion.

I haven't really adopted a rating scale so I'll stick with the age-old star chart. Half of a Yellow Sun gets an easy FIVE stars from me. I would highly recommend that everyone open their minds a little and read this novel!