Shadow of Night by Deborah Harkness

Shadow of Night is the second novel in Deborah Harkness' All Souls Trilogy. I picked up the first book, A Discovery of Witches, because I am taking part in Riedel Fascination's Ethereal 2015 Reading Challenge. I'd consider these books to be fantasy, a genre that I am not typically a reader of, but that's one of the reasons I decided to join Ethereal 2015. The first book was a worthwhile read, intriguing enough to make me consider reading the second one. What really got Shadow of Night off the shelf into my hand is the fact that Harkness takes her readers back in time to the end of the sixteenth century. Historical fiction is my guilty pleasure (which means Shadow of Night also works for The Book Riot 2015 Read Harder Challenge) and I'm a student of literature so the sixteenth century means Shakespeare! 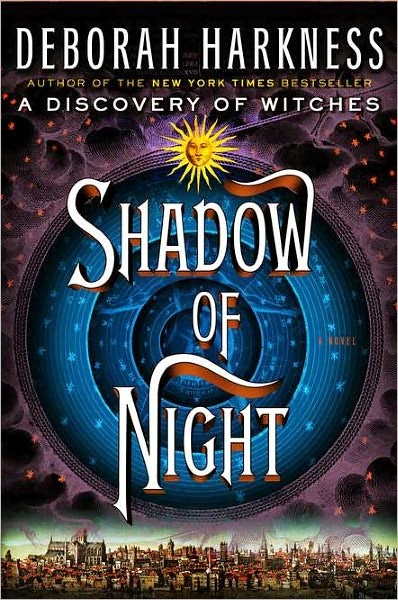 In my review of A Discovery of Witches, I was a little disappointed in Harkness' negative opinion of Shakespeare. Part of the reason I wanted to read Shadow of Night was to see how she treated Shakespeare in his own historical era. I am sad to report that it doesn't get any better in book two. Harkness pushes her opinion that Shakespeare stole all of his work from other authors, particularly Christopher Marlowe, whom she seems to be a fan of. If you happen to be a skeptic as well, I suggest you watch this little TED Ed video: Did Shakespeare write his plays?

Diana (witch) and Matthew (vampire) time walk (one of Diana's powers) out of twenty-first-century America back to sixteenth-century England both to escape danger and find answers. One of the main purposes of their time walking is to find a witch to help Diana learn about and control her powers. The wide array of witches and their many powers is, by far, my favourite aspect of the book. The descriptions of weavers; fire, wind, water, and earth witches; and the witches' fetches (sort of like pets, but with a lot of power, that live inside a witch's body and can be released when their assistance is required) are very finely detailed and definitely imaginative. The fact that I enjoyed these fantasy aspects more than the sixteenth-century setting says a lot considering I am a historical fiction junkie. The sixteenth-century setting was well done and clearly well-researched, but I found that most of the focus was on changes required of Diana's clothing more than anything else.

Harkness intermingles the past with the present considerably well. Diana and Matthew could not travel to the past without affecting the future and the author makes sure to address that detail intelligently. All of the characters that remained in the twenty-first century from the first book were brought into Shadow of Night in some clever way so as not to be forgotten. Traveling to the sixteenth century in turn, allows the introduction of new characters from both Diana's and Matthew's past adding to the depth of character development and plot.

In my review of the first novel I critiqued how Harkness casts Diana in the stereotypical role of damsel-in-distress and allows Matthew to become the knight-in-shining-armour. In Shadow of Night Diana receives some redemption despite the female-oppressing gender dynamics of the sixteenth century. As she increasingly masters control of her powers, Diana is able to save herself and rely less on Matthew for protection.

Before giving my final opinion, I have to mention one specific detail that really bothers me. I'll quote the line so you can see exactly what I mean: "The lumbering vehicles resembled enclosed wagons and were nothing like the dashing carriages in Jane Austen films." Jane Austen was a nineteenth-century writer, not a sixteenth-century writer so I am not sure exactly what the point of this reference was. I hope the mention of Jane Austen was meant to be a comparison between the centuries and the progression of transportation, but bringing in a reference to the nineteenth century at all when the settings (whether sixteenth or twenty-first century) have absolutely nothing to do with Jane Austen or the era when she was writing just seems like a mistake. The whole statement is out of place, especially to someone like me who is finishing a Master of Arts thesis on Jane Austen. I couldn't help but notice the oddity of the reference!

Shadow of Darkness is a bit slow to get going, but the last half of the novel is quite a page turner. I don't think I'll pick up the third book, The Book of Life, anytime soon, but I won't write it off forever. Overall I'm giving Shadow of Darkness 3.5 stars.