Back from Bots and Battling

It's been a long time since my last post, I know. My last day in Botswana was August 19 and I landed on Canadian soil on August 20. I've been 'home', and I use that word lightly, for almost three months now. I should have written this post a long time ago, but I didn't. Maybe it's because I was lazy, but more likely it's because I couldn't bring myself to bare my soul and break the wall I've put up around my heart since I've gotten back. 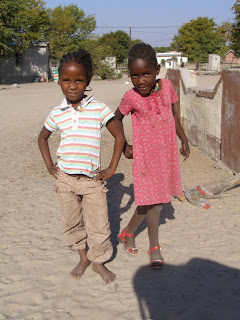 If you've been following my bustlings, you know that the turning point for me was the weekend I spent in Maun, Botswana and the children of Motse Wa Tsholofelo. Remember these two little divas? Well, they changed my life. From that weekend forward, each day that brought me closer and closer to leaving Botswana and the incredible work I was doing, was increasingly difficulty. I spent my last day, packing and crying, cleaning and crying, taking care of last minute business and crying, saying good-bye to such amazing people and crying. Did I mention I was crying? I was privileged enough to be in Botswana long enough to see my students off at the airport. As I watched each of the thirty-eight students say tear-filled goodbyes to ten plus members of their extended families and friends, I had to turn my back, take a deep breath, and tell myself to keep it together. Seeing grown men and women with tears streaming down their cheeks, knowing full well that this was the last time they would be seeing their families for at least two years, was almost too much for me to bare. Urging the students to say those goodbyes and get through airport security was one of the hardest things I've ever had to do. As I waved to the last student I felt an overwhelming sense of pride and inspiration. I was on the same flight as half of the group from Johannesburg to London. As I lead them from one Heathrow terminal to the next, to the Air Canada counter to get their next set of boarding passes, and then to the main departure area, my heart was full and the feeling of accomplishment was indescribable. As I waved good-bye for the final time, I assured them all, "You're going to be fine, next stop, Canada!"
I had a horrific trip home. After almost missing my connection in Johannesburg because my flight left late from Gaborone ("No Hurry in Africa"), I also arrived late in Chicago due to one incredible thunderstorm. Let my trip be a lesson to myself and everyone, DO NOT, I repeat DO NOT leave yourself less than a two-hour layover if you're transferring internationally through the Chicago airport. First of all, only one of my bags actually made it Chicago. The one that did make it, the bigger one that weighed about sixty pounds, had a broken pull handle meaning I had one heck of a struggle lugging it through the airport, or should I say getting lost in the airport. By the time I made it to the proper counter, I was already late for my flight. It is necessary to mention here that I had been traveling for approximately thirty hours at this point and that this particular flight was the final one in my trip. I had one more two-hour flight and I would be in Manitoba.
When the woman working at the ticket counter told me she couldn't find any record of me in the computer system, I started crying, just a bit. By the time they finally found record of my existence, I had about twenty-minutes to make it to my gate. Twenty-minutes might have been fine, except the check-in woman didn't have the necessary clearance (or something) to allow me to check-in to my flight with only twenty-minutes left to boarding. I had to see an agent. So, instead of taking me directly to an agent who did have the necessary clearance, she directed me to the back of another long line. I started crying a little more as I played out possible scenarios that could occur when I missed my flight. I could sleep in the airport. I could check into a nearby hotel. I would definitely need to try and get a hold of everyone anxiously awaiting my arrival at home, but I didn't have a cell phone so I would have to convince someone to let me make a long distance call with their phone or spend a fortune on a payphone.
An angel (because that's what she was) in front of me kindly asked me if I was ok. While attempting to hold back tears, I sobbed that I really wasn't and explained my entire scenario. She put her hand on my shoulder and told me I could go ahead of her. See?, angel. There were still two people ahead of me, but I figured if one person could be so kind, maybe a couple others could too. I swallowed my tears (and my pride) and begged them to let me go ahead. It is times like these that reiterate to me the reason I believe in the inherent goodness in people. They graciously moved aside and I was first in line. As the agent at the counter asked how she could help me, I let it all out. By 'all', I mean the pent up buckets of saline solution that my eyes were holding onto. I bawled and, between sobs, pleaded with the woman to just get me home. She made me sign a release on my luggage declaring I was a late check-in and I was off, running, yet again to catch my flight. As I sat in my seat on the final plane of my journey, the tears just wouldn't stop.
Looking back, I suppose they were tears of relief, but they were also tears of sorrow. The same tears of sorrow I've cried many nights since I've returned to Canada. 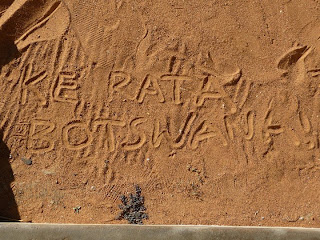 They come from an emptiness inside of me, a dark and lonely place that Botswana once filled. I miss the place; I miss the people, but most of all, I miss the work. I want to spend the rest of my life working for the betterment of the lives of those less fortunate. There is such a significant lack of human capacity in the world's developing nations. It is easy to get people to contribute money to build a new playground for a not-for-profit pre-school, but to get someone to provide the necessary funds to employ a teacher to instruct the children, is nearly impossible. What is even harder, is convincing people to venture outside of the safety of their comfortable bubbles to give of themselves for the benefit of others. I know this first hand; it took me a few years to conjure up the courage to get on that plane to Botswana. Once I got there though, it ripped me apart to get back on that plane and come back to Canada.
And now it's time to be brutally honest. I struggle everyday with the overwhelming sense that I am wasting my life here. I sit at my desk, stare at my computer, and think about the work I could be doing in Botswana or in any developing nation for that matter. At the same time, I know I have to be here for a number of reasons:
1. I need to finish my undergraduate degree. So many more opportunities will open up for me once I have that official piece of paper and can sign my name with a BA (Honours) behind it.
2. I spent all of my savings over the four months I was in Botswana. In order to financially sustain myself, I need to save more money before I can afford to work again without monetary compensation.
Ok, so I guess the 'number' of reasons is really only two.
I've been back in Canada for three months now and the thought of buying anything I don't absolutely need still sickens me. When I say 'sickens', I mean I physically feel sick to my stomach. When I walked into my apartment after being half way around the world for four months, I didn't feel a sense of comfort at finally being home; I felt nauseous. The ridiculous amount of stuff I have is disgusting. I lived happily with the things I could pack in a suitcase for four months. Some of the people I met in Botswana lived with less than that. In short, I don't need anymore things.
Don't get me wrong, I am proud to be Canadian. I love my country. I know a lot of great people here who support me in all that I do. My heart, however, is just not in my life here. It's buried in the vibrant red soil that stains my shoes, floating on the warm dry wind that wraps the sand around my skin, with the little girl who played with a stick and bottle cap until I gave her the doll she now cuddles. Ke rata Botswana. You and I will be together again someday, but not soon enough.
Posted by ~Brandy~ at 6:57 AM 5 comments: