Continuing on with my backlogged blogging...
DAY 11
Sunday, March 4 - I bought my Mom a surprise cup of coffee and put the change from the purchase in the Tim Horton's Camp collection box. I also posted an inspiration photo with quote on a fellow kind soul's facebook wall.
Today was another really rough personal day for me so it was Mom to the rescue as always. Yes, I am 28-years old and still need my Mom to comfort me. There is no shame in that. As for the fellow kind soul, Barbara always brings a smile to my face and is just one of those people that does kind things for others on a regular basis.
DAY 12
Monday, March 5 - I delivered a print job to a coworker so she wouldn't have to pick it up, held the door open for the man coming up behind me, complimented a different coworker on her hair style, let someone into my lane of traffic & provided moral support for a friend.
Ok, so today my kindness cup clearly overflowed. The Print Shop on campus is located in another building so picking up jobs we send over to be completed requires a bit of a jaunt. I had to pick my printing up and figured why not deliver someone else's too. Chris is actually in the same building as the Print Shop, but she's in the basement and it's on the first floor and that requires stairs. No one likes stairs! As for the opening the door - chivalry is not dead folks and there is nothing wrong with a little gender role reversal - it's all about equality, right?! It's always nice to have someone notice when you try something a little out of the norm in terms of hair styles so today I made sure Kristen new I noticed. I also know what it's like to put my signal light on and wait, endlessly, while people just blow by me. Today, at least one person didn't have to get frustrated. Providing moral support for my friends is just something I do because I am a good friend, but I thought I would include it here just for kicks!
**BREAKING KINDNESS NEWS: I was privileged enough today to be the receiver of a special gift. Angie Currie brought me a goody bag containing a book, chocolate, and a lolipop.**
DAY 13
Tuesday, March 6 - I did a last minute favour for a friend and tapped into my contacts to get "I don't eat meat" translated into Arabic. I also made a playlist of videos for BU's International Women's Day event and, once again, let someone change into my lane of traffic.
A friend messaged me today on behalf of a friend of hers to see if I knew anyone who could write in Arabic. It just so happened that I do know people who can and so, in preparation of her trip to Kuwait, I was able to get "I don't eat meat" translated for her. You guessed it; she's a vegetarian. The playlist for International Women's Day showcases a number of cultural messages pertaining to women's rights. I'll leave it at that and if you want to learn more you can just click on the link. Kindness =2 Road Rage = 0. 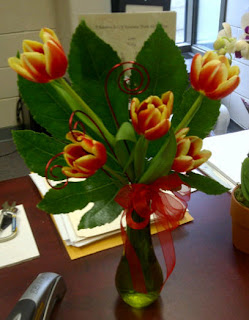 **BREAKING KINDNESS NEWS: Early in the morning I was brought a Tim Horton's double/double from a lovely friend (Shelley). In the afternoon, beautiful tulips were delivered to my office from another wonderful friend (Haley).**
DAY 14
Wednesday, March 7 - I promoted Kony 2012, but also provided an alternate view to the campaign. I encouraged a friend today & posted a unique image to a friend's facebook that I knew he would appreciate and chuckle at.
Kony 2012 became all the rave in a very short time, but while it is easy to simply 'jump on the bandwagon', it is entirely more important to educate yourself and form your own opinion on the matter. Again, with the typical friend encouragement; whenever they need it, I give it. As for the unique image, when I come across something that immediately makes me thing of a certain person, I share it with them for no other reason than I know it bring a smile to their face for at least a brief instant. Hopefully, the image made Will smile.
DAY 15
Thursday, March 8 - I had one of the baristas give away my free coffee on my Forbidden Flavours Loyalty Card, sent one of my girlfriends a special International Women's Day message, and traded vehicles with a friend to save her money on gas.
Once you've paid for ten coffees you get your eleventh one free, but today, a random stranger got my free coffee. Glenys gave the coffee away to an international student who she wasn't sure actually understood the significance of the gesture, but he got his coffee for free none-the-less. Jocey is one of my best girlfriends and one of the reasons I am proud to be a woman. She is a huge fan of Daniel Craig (aren't we all, girls?!) so when I came across an International Women's Day video showcasing him, I had no choice but to post it on her facebook wall. $100 vs. $40; we traded vehicles.
DAY 16
Friday, March 9 - I donated food to the BUSU Food Bank and sent out a mass email and facebook message to my contacts asking them to contribute some of the high priority items needed as well.
After the fire in late November, the Food Bank was left in a desperate state. Folks came together in a brilliant display of compassion to help replenish it, but there were still a lot of items in severe shortage. After talking to Graham, the coordinator, I sent out a list of high priority items and helped restock the shelves at least a little more.
DAY 17
Saturday, March 10 - I returned two shopping carts randomly left in the Walmart parking lot and left the loonie in the shopping care I used at SuperStore.
I deemed today, Shopping Cart Day.
DAY 18
Sunday, March 11 - I said 'hello' and/or smiled at everyone I crossed paths with while out for a stroll. I also created an account on We Give Books.
My random act for today was actually just going to be the fact that I got off my ass and went for a nice long walk, but as I started along my merry way, I realised I could add a little something to my walk by simply smiling and saying hello to the people I passed. Some people said 'hi' back, others smiled back, and some people looked at me like I was a crazy person; mission accomplished. As for We Give Books, you create an account, read books online, and for every book you read the company donates a book to a cause of your choice. I chose African Library Project.
DAY 19
Monday, March 12 - I mailed a "Thinking of You" card to one of my best friends. I also submitted an esmile to the Gallery of Smiles for Ronald McDonald House Charities.
I originally bought a Valentines Day card for Jocey in ironic honour of the fact that she and I both really dislike the Hallmark Holiday. Due to no real excuse, I didn't get around to sending it until well after V-Day was over. It's the anti-love thought that counts right?! I came across the esmile idea on 366 Random Acts of Kindness and thought it was such a simple and thoughtful idea, so I stole it! For every esmile submitted and accepted, HP donates $1 to a Ronald McDonald House. 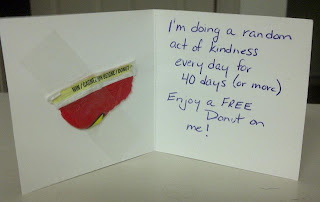 DAY 20
Tuesday, March 13 - I left a card with a slip from a Tim Horton's roll up the rim for a free donut on a random vehicle's wind shield. I also shipped 18 boxes of textbooks to Better World Books.
Remember, increments of 10 get something a little extra special. The card containing the slip for a free donut was planned. The fact that the guy showed up to pick up the boxes of books just happened to occur today. 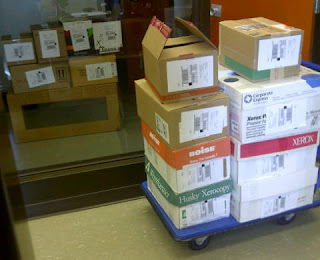 I've been shipping textbooks to Better World Books for about three years now. Working at a university makes collecting books incredibly simple, as you can imagine. Packing hundreds of textbooks and preparing them to be shipped, however, is no easy task. Once the books arrive at Better World Books, they are either shipped overseas, sold and the money is used to purchase supplies that are shipped overseas, or they are recycled. The money from and/or the books themselves is given to Books
for Africa, a literacy program in, you guessed it, Africa. When I was in Botswana, I had randomly stumbled upon a Books for Africa initiative, Botswana Book Project, and spent the weekend volunteering and seeing my work in Canada come full circle. It was one of the most rewarding experiences of my life.
NEXT UP...DAYS 21-30!