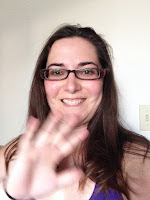 Do you have a friendly waving story?
I'd be delighted to read all about it in the comments!
Posted by ~Brandy~ at 8:30 PM