In November of 2011, I started and almost completed a 40-Day Random Acts of Kindness Challenge. Yes, I said 'almost'...shamefully. In February of 2012, after an awful bout of illness and a few other bad news scares, I made a promise that if everything worked out alright, I would start (and finish) another 40-Day Challenge.
I am currently on Day 51 and plan to continue going, inspired by 366 Random Acts of Kindness which I stumbled across while searching for random act ideas. I wish I taken the time to blog each day's acts as I've been going along, but I didn't and, so, am now going to play 'catch-up'.
Here goes:
DAY 1 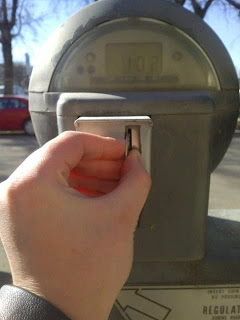 Thursday, February 23 - I put spare change in parking meters at the clinic & held the door open for two mothers and their waddling toddlers.
As I walked towards the clinic for my appointment, I promised myself and the powers that be that if everything turned out alright after said appointment, that I would start my Random Acts of Kindness Challenge. In fact, I started the challenge before I even went in for my appointment in the hopes that good karma would come my way. The spare change in my wallet was transferred into random parking meters. On the way out after my appointment, with the good news I was hoping for, I held the door open for two mothers and their just-learned-to-walk toddlers.
DAY 2
Friday, February 24 - I made sure to hold the door open long enough so the people leaving behind me didn't have to re-open.
Today was a rough personal day for me, but thanks to my wonderful mother, I was still able to get into Winnipeg to see a play (The Fighting Days) I had bought tickets for. I didn't feel much like doing nice things for people, but at the very least, I ensured that the door of the Manitoba Theatre Centre didn't hit other people in the face.
DAY 3
Saturday, February 25 - I let a girl go in front of my indecisive self in the Subway (eat fresh) line up & finally picked up the trash in front of my apartment that I walked by every day.
I figured since I couldn't make up my mind, there was no reason to make the girl behind me wait, so I told her to go ahead. As for the garbage, apparently some of the people that live in or visit people who live in my building feel the need to throw their trash on the ground rather than carry it the few extra steps until they get inside to a garbage can. In short, I cleaned up their mess.
DAY 4
Sunday, February 26 - I gave someone a ride across the city because the transit system doesn't run on Sundays & started house/pet-sitting for friends.
Yes, apparently the transit system here fails to operate on Sundays. I guess people don't need to go places on Sundays. I drove down to the south west side of Brandon from my apartment in the north east, picked up this person (sort of an acquaintance, I guess), drove him up to his house in the north east part of Brandon, and then drove back to the south west part of the city to begin my 3-week stint house/pet sitting. Yes, 3-weeks, but I'd like to point out that I am only counting it as ONE act of kindness not 21...just sayin'. Did I mention that I was taking care of their home and 'extended family' because they were in Costa Rica?! But, honestly, I was glad to do it; Jocey's family is my family and I truly treasure them. (I got some pretty sweet swag when they got back too).
DAY 5
Monday, February 27 - I bought a coffee card for a colleague & switched vehicles with a friend so her fuel costs to Winnipeg would be lower.
Today was my first day back at work after being off sick for two weeks (strep, reaction to antibiotics, mono, strep again). Maureen did so much work for my while I was away that I felt I owed her at least a little something. As for Tina, at the time she was driving a huge beast of a Ford F150 that would cost her $100 to go into Winnipeg and back. My little Grand Am costs a small fraction of that at $40. It made sense to switch.
**BREAKING KINDNESS NEWS: As a 'welcome back to reality' gift, Tina brought me a beautiful orchid. (it's still alive)**
DAY 6
Tuesday, February 28 - I posted a link to a friend's blog - here it is again - Postcard Valet - and asked another friend to comment on it.
You see, Arlo and Oksana are travelling around the world, or they were; now they are living in Australia for a while. One of the places they visited was Cambodia and as a part of their travels, Arlo posts a blog with his thoughts on each place they visit. My other friend, Haley, lived in Cambodia for three months so I thought it would be fitting for her to comment on his comments. After doing a quick check, I realise that Haley hasn't actually commented...yet, but at the very least, I'm sure she's read it. She's in law school so I'm surprised she even has time to breathe!
DAY 7
Wednesday, February 29 - I bought a Frappe for an unsuspecting friend and brought it to class for her. I also left an uplifting photo and comment on a networking contact's facebook wall.
Carissa is a beautiful person who makes me smile with her simple presence; she was the recipient of the Frappe. The facebook contact is someone I met electronically because we share a mutual love of books. Jennifer always shares cheerful things on her facebook profile so I felt it would be nice to return the favour and tell her that I notice. 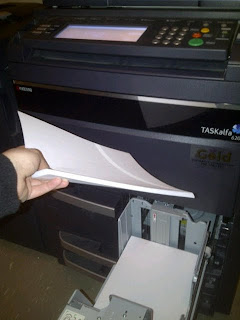 DAY 8
Thursday, March 1 - I donated a couple colouring books to the Psychology Nursery at work, filled the communal office photocopier with paper & bought lunch from a campus club (SIFE) that were raising funds to attend an international business competition.
As part of the Child Psychology course at Brandon University (where I work), we have a nursery that children attend. A while ago, I had bought some coloring books for cousins of mine who I realised were far too old for the nature of the coloring books. Rather than return the books, I gave them to the nursery. I really have no idea how many people use the copier in our faculty, but I do know that it never has enough paper in it. I filled all four trays so others wouldn't have to. Chili and a bun was my scrumptious lunch for a good cause.
DAY 9
Friday, March 2 - I made a donation to a friend who was participating in a stationary bike race for Cerebral Palsy & sent the lead actress in a play - "Miss Witherspoon" (who I don't know) a facebook message telling her how wonderful she did.
Judy participates in the stationary bike race every year. This year her team raised something like $9000 (I gave her $20); that's intense! "Miss Witherspoon" was performed by the Brandon University Drama students and, as always, they did a fantastic job. I always feel that it is important to give credit where credit is due and typically means a little more coming from strangers.
DAY 10
Saturday, March 3 - I paid for the woman's order who was behind me in the McDonald's drive thru.
When the day of the challenge reaches a multiple of 10, I try to do something a little above and beyond. I think the smile on the drive thru employee's face was the best part!
DAYS 11-20 - COMING SOON!
Posted by ~Brandy~ at 11:32 AM