DAY 31
Saturday, March 24 - I hung clothes back on hangers that I noticed had fallen off while shopping.
As I searched for the odd treasure among the abundance of clothing articles residing on the racks in Winners, I fixed any shirts, pants, dresses, etc. that were falling off the hangers.

DAY 32
Sunday, March 25 - I edited an application letter for a friend.
Honestly, I do this for so many friends, that I have no clue who I did edited this particular letter for. Maybe Ang? Maybe Haley?

DAY 33
Monday, March 26 - I paid attention in class, did a workout (RAoK to myself), wrote and sent a letter of support to a friend struggling with immigration, and sent e-cards to people I haven't appreciated enough lately.
The Random Acts of Kindness Foundation said that paying attention in class counts as a random act, so there. I included the workout because I used to work out all of the time...and then...I got sick and busy and stopped. It feels so good and I feel so proud of myself afterwards, so why can't I seem to make myself do it more often?! Sara is living my dream in Botswana right now. Motse wa Tsholofelo (Village of Hope) is just one of the wonderful causes she is working to support. What aren't included in my dream though, are the number of issues that arise with immigration when one is not a citizen of the country in which one is trying to do so much good. I wrote a letter of support for Sara and the incredible work she does. They better listen, or else! Suzi and Karen are two efriends (people I've never actually met in person) that have made a significant impact on my life. I sent them "thinking of you" e-cards to remind them of their importance. 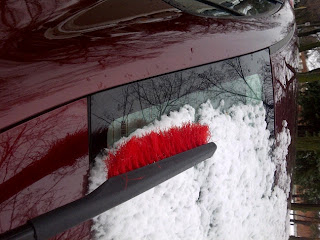 DAY 34
Tuesday, March 27 - I paid forward the RAoK coffee I was given and brushed the snow off of another person's car.
I already had a coffee when Shelley brought me a Timmy's. I've been meaning to bring Glenys a coffee for some time now, but can never seem to get myself out of bed in a timely fashion to enable myself to get to Tim's before work. Today Glenys got my coffee from Shelley. Yes, snow. Wet, heavy, snow. I had to brush my car off, so I brushed off the car that was parked behind me too. 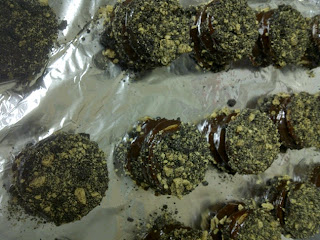 DAY 35
Wednesday, March 28 - I made and brought Reeces Stuffed Oreos to work and shared.
Ok, everyone who ate one of these will attest to just how freakin' amazing they were not to mention the sugar high they provided. YUM!

DAY 36
Thursday, March 29 - I shared "Gratitude" on facebook.
This video is incredible. Too often we take our existence for granted.

DAY 37
Friday, March 30 - I helped a friend with school work and finished putting together a slide show of my random acts to submit to SAARA to try and win some money for charity.
Abraham is a Math and Science genius. He's really good at English too, but it's just not his expertise so I helped. This video of the slide show is really amateur, but it does the job. I submitted it to the SAARA awards in the hopes of winning some money for charity. The winners were announced today and, sadly, I was not among them. Maybe next time!

DAY 38
Saturday, March 31 - I shared a classical music playlist perfect for studying.
I studied all day today with the occasional facebook break. I noticed that a few other people were engaged in similar activities so I decided to share my study playlist.

DAY 39
Sunday, April 1 - I bought a friend coffee and baked cookies for another friend's fundraising bakesale.

Again, I really don't know who it was that I bought coffee for, Tina, maybe. Yes, I think we went to Starbucks. As for the bakesale, Pumpkin Spice Cookies for the win. Ang was having a fundraiser for her Relay for Life team so, of course, I helped out.

DAY 40
Monday, April 2 - I committed to continuing on with this challenge, made a donation to a friend's Relay for Life team & told a friend that I would help pay for him to take the class he wants to take in Winnipeg this summer.
Today was supposed to be the end of my kindness challenge, but this guy is on day 112 of 366 Random Acts of Kindness, so my measly 40 days seemed trivial in comparison. With that said, onward we go. Another friend, Shelley, also has a Relay for Life team, so today I gave her a $20 donation. The last one on today's list is the big one (the one I do every ten days). Abraham has the biggest heart of anyone I know. He came to Canada from a refugee camp in Kenya only two short years ago. He's in university with aspirations of becoming a doctor and there is a summer class offered at the University of Manitoba that he needs in order to graduate. He could wait and take it at Brandon University, but that would mean a longer study period. He sends a lot of his own money home to help his family back in Africa, so when the opportunity came up to take this class he couldn't afford it. Tina and I are helping him. You may be asking yourself why we would be willing to use $500 of our own money to help our friend. Abraham has been through more in his life than Tina or I or even you can imagine. He is the essence of humility and all that is good in this world. The look on his face when we told him we would pay for his course was magical. We couldn't ask for any greater reason than that to help him.