Ok, I am almost caught up. Today (April 26) is Day 64. I suppose it isn't all that random if it's planned, but I am planning to have one of my acts on Day 70 be to start pulling inspiration quotes from the gift Ang gave me on Day 50 and to start blogging about my Random Act, themed after said quote, everyday.

DAY 51
Friday, April 13 - I planned one volunteer event, executed another volunteer event, delivered an invitation from the university to the home of a colleague to ensure she received it on time & sent a best wishes message to someone I had a falling out with.
World Fair Trade Day is May 12. I met with the manager of Ten Thousand Villages today to organise a collaborative event between the store and WUSC. We'll have entertainment and a small percentage of the day's sales will be given to WUSC. Today was also, Band-AIDS. WUSC raises funds for the Bike for AIDS (that's the AIDS part) initiative every year by holding a concert (that's the Band part). We held it on campus in SUDS and raised just under $300. I have to thank Shannon for helping organise the whole thing, Eddie from Hudsy for letting us crash his social and performing for us, as well as Misty Street and The Heavy Souls for performing for us. Natasha is the coordinator for the Psychology Nursery at BU and since she only works every Tuesday and Thursday she tends to get missed during important events. The senior administration at the university was holding an Employee Appreciation Breakfast on the 17th so I dropped off the invitation at her apartment so she'd be sure to get her chance to take advantage of the free breaky. As for the friend I had a falling out with, I'll spare the details because they are quite personal, but it was his final performance for his undergrad degree and I figured the least I could do was send a little token of kindness his way despite our differences.

DAY 52
Saturday, April 14 - I attended a high school play & sent a congratulatory email to the play's director.
Urinetown was performed by students from Neelin High School. $1 from every ticket purchase went towards Compassion Canada's efforts to build sanitary latrines in developing countries. The play was fantastic and like I've said before, it's important to me to give credit where credit is due so I emailed the director of the play and let her know how great I thought the play was. I also took the time to highlight some of the more spectacular performances by specific students. I received a very thankful response from her and a request to post the email on their public display board. 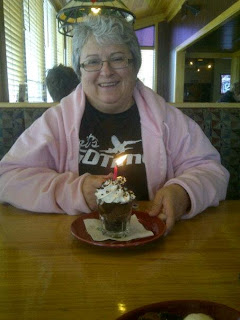 DAY 53
Sunday, April 15 - I took my Mom out for a birthday dinner and surprised her with a candle when her dessert came out & wrote a letter of support for a professor's nomination for a teaching award.
My Mom turned 54 today! I took her out for dinner and made sure that we ordered dessert. When her's came out, I quickly grabbed the candle and lighter I had stashed in my pocket and made her yummy treat just a little more special. As you can see, the look on her face was priceless. I love you, Mom. One of my favorite professors was being nominated for the BU Alumni Excellence in Teaching Award and I was asked to write a letter of support for the nomination. Of course I did it, with the utmost pleasure.

DAY 54
Monday, April 16 - I posted a song to a grieving friend's wall.
The nature of the loss and the person's identity is best kept discrete. What I will tell you though, is that Angels Among Us is a song that has gotten me through a lot of trying times in my life and I thought it was fitting to share.

DAY 55
Tuesday, April 17 - I helped a friend register for classes & attended a creative writing reading to support my friends.
'Tis the time of year to register for 2012-13 classes. It's not really the easiest thing to do, so I helped Abraham out. Now he's all set to get his learn on come September. The creative writing reading was really for my own good. Hearing Kirsty, Johnson, and Ryan (among other students) read their fantastic work made me miss writing so very much. These types of events always reiterate to me the abundance of raw talent we have at BU, my friends being some of the best of the bunch!

DAY 56
Wednesday, April 18 - I helped a friend put the finishing touches on a powerpoint presentation & mailed an application for name reservation for a not-for-profit.
Barbara was getting ready to do a presentation at the Senior Colloquium (another display of phenomenal student talent) and she needed help getting some videos onto her slides. Yours truly, to the rescue! Friends for Development is the name of the not-for-profit that Immaculate and I (mostly Immaculate) are working to get recognised so that we can start doing some official work. We've been trying to get it underway for some time know, but hopefully now the name will be officially approved and filed by the Manitoba government and we'll be set.

DAY 57
Thursday, April 19 - I paid for the friend I mentioned on Day 40 to take the class, attended a potential board members meeting for The Marquis Project & chose WUSC's SRP student for 2012-13.
I'm pretty sure paying for Abraham's class made my day almost as much as it made his. I cannot express the kindness that Abraham embodies and I am happy to be able to help him. A big thanks also has to go to Tina for suggesting we do this. A few weeks ago I was asked if I was interested in sitting on the Board for The Marquis Project. Today was the meeting for potential new members. It looks like I'll be taking a position on the Board, I'm just not sure what that will be quite yet. One more project = exciting! Every year as part of WUSC we go through files of potential students in refugee camps that have qualified for WUSC sponsorship. As part of the selection committee, I read the files (try not to cry) and rank the candidates in terms of who I feel is best fitted to come to BU for a post-secondary education. I wish we could bring them all.

DAY 58
Friday, April 20 - Attended a friend's presentation at the Senior Colloquium & facilitated a session later on.
Remember Barbara on Day 56? It was her presentation on the exploitation of women in advertising that I attended. There are few things more rewarding than presenting work you've poured your blood, sweat, and tears into. Having friends to support you, is just an added bonus. O, and, of course, Barbara rocked it! Later on, I was the facilitator for a session on cross-cultural education. I was honoured to be asked to facilitate and happier to do it.

DAY 59
Saturday, April 21 - I held the door open for people at the theater & let a family go ahead of me in the concession line.
American Reunion was the movie and I realised that it was 9:30 p.m. and I still hadn't done a random act. I held the door open for a few people exiting the theater and then as I got to the concession line, allowed a family that arrived at the same time as me to go ahead.

DAY 60
Sunday, April 22 - I spent time with a friend I haven't spoken to in a really long time.
Every time I saw Tegegn on campus I felt guilty for losing touch with him. We had a tentative 'date' set for today and I almost cancelled because I felt like I should be studying for my exam the following Wednesday. I'm glad I didn't cancel because we spent nearly four hours just talking about life and it was great!


Almost there folks! One more 10-at-a-time post and I'll finally be posting my random act on the actual day that I do it!
Posted by ~Brandy~ at 10:02 AM