This challenge really wasn't supposed to go past Day 40, but I couldn't resist. It feels great to actually take stock of the nice things I do for people. What's even better is when I hear that I've inspired others to do kind things as well.

DAY 41
Tuesday, April 3 - I put cards with uplifting messages in them on random people's windshields & put money into an expired parking meter.
The cards said: "Smile, it looks good on you!", "Don't Worry, Be Happy!", "Do more of what makes you happy!", and "Smile and the world will smile with you!". Each of the cards also said "40-Day Random Acts of Kindness - Day 41." Hopefully, I saved the other person from a parking ticket.

DAY 42
Wednesday, April 4 - I attended an LGBTT* awareness workshop, shared posts on facebook for Refugee Rights Day and SAARA Smile Awards & voted for the SAARA Smile Awards.
The workshop was put on by the President's Office at BU. I really learned a lot and had my mind opened to a few new ways of looking at LGBTT* issues. If you know me, you know that the plight of refugees is kind of my thing. Awareness is the key! As I mentioned before, I submitted a video to the SAARA Awards contest, but didn't win. The smaller Smile Awards ($500) were chosen by votes from the public. People are do amazingly kind things every day - take notice! Here are the first round winners!

DAY 43
Thursday, April 5 - I returned a stray shopping care to a store & gave Mom an Easter gift.
I've done the shopping cart thing before, but sometimes a duplicate opportunity presents itself and must be taken. I also bought my Mom a Phalaenopsis Orchid for Easter.

DAY 44
Friday, April 6 - I put flowers on strangers' graves & gave my Baba an Easter gift.
Whenever I head home to Gilbert Plains, I try to remember to get flowers to freshen up the grave sites of my deceased family members. This time I bought a few extra flowers and placed them on random graves in the cemetery. My Baba also got a Phalaenopsis Orchid for Easter.

DAY 45
Saturday, April 7 - I joined and shared Stop Teen Suicide on facebook & spent some time looking into different non-profit groups to become involved with.
I'm really just one of those people who enjoys finding great causes to support and advocate for.

DAY 46
Sunday, April 8 - I cleaned up the kitchen after Easter lunch.
Baba cooked, Mom and I cleaned, and I took the leftovers back to Brandon!

DAY 47
Monday, April 9 - I edited a friend's paper, committed to taking part in Sneak it in Week & gave a donation to two professors competing in Pie Your Prof.
Editing is what I do best; honestly if I charged everyone who I edited a paper for, I'd be relatively wealthy. I think this one was for Abraham, but I really can't be sure. Sneak it in Week was an initiative to get people active despite their busy schedules. The basis for the idea is that ten short minutes of physical activity is better than none. Everyday this week, I made sure I spent at least ten minutes, usually more, doing physical activity. Pie Your Prof was run by the university BUZS (Brandon University Zoology Students) to raise funds for the Food Bank. I gave $5 to the two Psychology Profs pitted against one another. In total, the group raised a little over $4500.

DAY 48
Tuesday, April 10 - I shared my Easter goodies with a somewhat unsuspecting acquaintance & edited two papers for a friend.
Yesterday I mentioned to Glenys that I had borscht and Easter bread from being home on the weekend. She was jealous so I brought in some of my goodies to share with her. I mean, honestly, I can get my hands on that Ukrainian goodness whenever I want so sharing really wasn't a big deal. Editing, remember, it's what I do. This time I know it was for Immaculate.

DAY 49
Wednesday, April 11 - I contributed some 'art' to Angry Arts Week & bought a round of drinks for my classmates after our English exam.
This little blurb is taken from the Angry Arts Week event that took place at BU: "In the 1960s, there was an event of art and protest fused together called Angry Arts Week that took place in New York. People were angry for a number of things such as war, and they expressed this anger through art which was a powerful agent in social change. Anger is a very valid emotion and people have a tendency to grin and bear it which fixes nothing". I should have taken a picture of my 'art', but I didn't. It was red letters outlined in black that said, "Why can't people just be fucking nicer to other people!" Today was also the last English exam of my undergraduate honours degree. I was a little drunk to write it and a little drunker afterwards. Drinks on me!

DAY 50
Thursday, April 12 - I went above and beyond at work to help out the other Office Assistants, made a point while shopping to compliment the service I received and thank those that assisted me & made an extra special card for a friend's birthday.
Shirley and Maureen were both away from the office today and there were some important (according to the Dean's Office) invitations that needed to be delivered before Tuesday. Rather than leave it for them to do first thing when they returned Monday, I borrowed a key and delivered the invitations to all of the faculty members' mailboxes. I decided I needed some shopping therapy after work today so I made sure to thank the sales associates that were especially helpful. At La Senza I specifically told the manager (at least I think she was the manager) that one of her associates did a really great job. As for Ang's card, I always get these super thoughtful gifts from Ang and, to be honest, I kind of feel like a deadbeat friend sometimes. I put some extra effort into her card this year so she'd know, at least a bit more than usual, how much I appreciate her friendship. 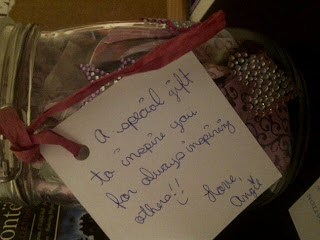 **EXTRA SPECIAL BREAKING KINDNESS NEWS - Remember how I just said that I get the most thoughtful gifts from Ang? Ya, she did it again. For no reason at all, she gave me an Inspiration Jar, which is pretty much the coolest gift ever. Once I get caught up with this blog, I'll start picking a quote out of the jar everyday and themeing my days/random acts of kindness around the quotes. Can't wait!**