Kickin' it in Kasane

Once again, I really have no idea how I am going to manage to put my latest adventure into words. We'd been planning this long weekend trip since our arrival in Gaborone nearly 3 months ago. The four-day long weekend in July would be our only opportunity to travel up north for long enough to truly experience both Chobe National Park in Kasane, Botswana and Victoria Falls in Zimbabwe. First step, acquire tickets on the overnight bus from Gabs to Kasane. This required me finding my way to, around, and back from the Station/Bus Rank in Gabs all on my own. That, my dear friends, is the thing (for me) that nightmares are made of. But, I came, I saw, I conquered and we were booked on the Friday night bus. Next step, convince Angela that she could come on the four-day trip without luggage. You see, she was on her way back from Ethiopia and as luck would have it, her luggage got lost in none other than the Joburg airport (notorious for losing luggage). She called in a panic, but after a concurrent 'just get your ass down here' from both Emma and I, she was on her way with only the clothes on her back and the couple things she had asked me to bring for her. Moving on, wait three hours for the bus to actually arrive, get pushed and pulled while people fight to get onto a bus that has assigned seating, drive around Gaborone for an hour looking for a fueling station that is not out of petrol (apparently there was a shortage in Gabs), and finally leave the city 4 hours after we were originally supposed to. Now that we are actually settled on the bus and on our way, we decide we should at least try to get some sleep despite the frigid temperature, bright interior lights, and ridiculous movies playing all night long. At approximately 4 a.m. the bus stops, everyone has to get out, and we are instructed to step in what looks like a small crate of wet, muddy paper towel. This is a veterinary check-point to stop the transfer of foot and mouth disease. Please, don't ask! Back on the bus, back to sleep, and I awaken at around 7:30 a.m. because a suitcase from the overhead compartment has fallen on top of my head. Only a couple more hours and we arrive in Kasane at last.
After that horrific bus ride, the trip only gets better. We call Chobezi Safaris and immediately get picked up by a driver and taken to Chobe Safari Lodge where we arrange a boat cruise, lunch, and then an afternoon game drive. Let the magic begin! Hippos, crocodiles, monkeys, monitor lizards, impala, warthogs, water buffalo, and wild birds galore. Then a fabulous buffet lunch and off we go on a game drive. This part of the trip, from start to finish, is indescribably magnificent. We drive into herd after herd of elephants and just sit there and watch them. These beautiful giants are so close to us that, if allowed, I could have reached out and touched one's forehead. I kid you not. This video is as close as I can get to sharing the experience with you. Enjoy!
Alright, so although the title of this blog is "Kickin' it in Kasane", we actually spent most of our time in Victoria Falls, Zimbabwe. The reason: Shoestring Backpackers. It is where all of the volunteers who travel from Gabs to Vic Falls stay. Reason #1 it costs $10 a night. Reason #2 the atmosphere is incredible. 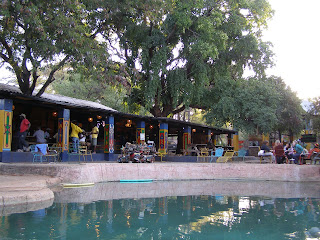 This is a photo of the basic gathering area of the hostel. There's a bar, a little information/convenience store, an internet room, a kitchen, a living room area, and a restaurant (sort of). Everything was so cheap and every night the locals would come in to party. If you know me, you know I'm not much of a party animal, but I stayed up and chilled out with the other gals for as long as I could stand it. What I mean by that is, for as long as I could take being hit on mercilessly by men who when I told them I had a boyfriend needed to know, first, where he was from and, second, whether he was black or white. I took an educated guess and figured 'black' was the correct answer to get them to leave me alone. It worked...until they forgot they had already talked to me and the cycle would start all over again. I thought the Motswana men were bad, but the Zim men are ten times worse. My breaking point came when I had to respond, "No" to: "But won't you just help me to complete my life's journey?" It was likely only around 11:00 p.m., but it was time for bed! 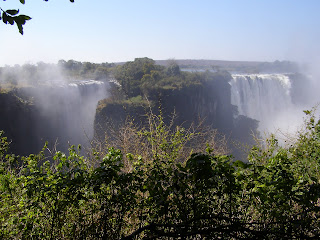 Out in the town of Victoria Falls, when we weren't being accosted by locals trying to sell their obsolete currency and handi-crafts, we were being followed by young children begging for money so they could by food. Perhaps only thirty feet away or so their mothers and fathers would be sitting feeding their siblings candy. Yes, it really was that bad. We did a bit of souvenir shopping and then made our way to the famous falls. Yet again, I have no clue how to describe the magnificence that I saw. We opted out of the raincoats that were available for rent, deciding that getting completely soaked was all part of the Vic Falls experience. The beginning of the walk consisted of the odd misting of light water droplets. "This isn't bad at all", we thought to ourselves. Soon enough, however, the light misting turned into a torrential downpour and we were drenched from head to toe. The final point of the walk is called Danger Point. The rocks are slippery. There are no guard rails. We climbed out on the rocks despite the name of the location, turned around to take in the full 360 degree view, and saw the most beautiful rainbow. I found myself completely speechless in the presence of the brightest red, orange, yellow, green, blue, and violet I am likely to ever see in my life.
I have rarely been more thankful in my life than I was when Emma and Angela agreed that we would fly home rather than take the bus. We arrived back in Gabs dirty, likely a bit stinky, and completely exhausted, but the trip to Kasane and Victoria Falls was worth it and so much more.
Posted by ~Brandy~ at 2:54 AM