I honestly don't even know where to start with this blog post, but here it goes.
July 8, 9, and 10 found my roomies and I in Maun visiting a fellow Students Without Borders volunteer. We set foot out of the airport and into the city itself. It's touristy, developed, and the sand isn't bright red! Almost immediately upon exiting the central hub of Maun we see some of the worst poverty we've seen so far. An incredible woman we met there described Maun as a thriving city inside a dying village and that couldn't be closer to the truth. There is a severe racial split in Maun, almost as bad as South Africa, with the white ex-patriots running the majority of the local businesses and the black locals living in filth and battling starvation. We went to a bar on Friday night and it was full of white people. It was just like being back home in Canada and while it was comforting because it was familiar, it just didn't feel normal. It's hard to describe, but I missed the get-togethers in Bots where everyone dances and dances well because they're black and they were born with natural dance talent...I'm really not kidding. We found a small group of black women bustin' some moves in a corner and spent most of the night with them. The local people are truly Africa's finest asset.
We visited the homes of some of the children that attend Motswe Wa Tsholofelo Pre School and Day Care Centre (that's where Sara, the SWB volunteer we went to visit is placed). While Sara did some interviews with the families, we played with the children. It was a beautiful experience, making macaroni necklaces and having three-legged races with the children. 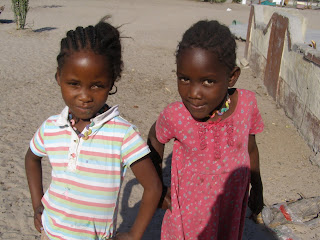 Try as I might, however, I couldn't help noticing the one-room (no larger than my bedroom) in which ten plus people, mostly children, lived. As the flies landed unnoticed on the baby's face, I had to keep the tears from paving paths down my dust-covered cheeks. She is the face of Africa that I am used to seeing in the Canadian media. The face of poverty, the face of reality, and, dare I say it, the face of hopelessness. I'm not going to post the photo we have of her here; if you want to see it, it's in my facebook album, "Bouncin' Along in Bots". Instead, I will share with you the photo of these two precious divas. The sweetheart on the right attends the daycare. The other pretty little doll was so shy when we arrived that she wouldn't come near us, but she soon warmed up to us when we brought out the paints and starting making necklaces. If you look closely, you can see the 'jewelry' we made together. Friday, my friends, was a tough day.
Saturday, we spent the day with Botswana's best known tourist attraction, the Okavango Delta. 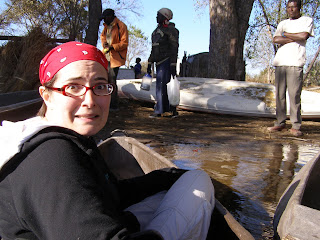 Sara set up the tour for us, so we really had absolutely no idea what we were getting ourselves into. A mekoro tour, ok, so what's a mekoro? A small boat paddled by a Motswana guide. As in the ones that are easily tipped by hippos and crocodiles? It can't really be that, can it? O, yes it can! I'm not actually that terrified, but close. It was an incredible experience, but I would only recommend a half day tour rather than a full one. We spent eight hours getting smacked in the face with reeds, getting covered in bugs, and feeling the effects of the sun and wind on our faces. I know that makes it sound horrible, and, at times, it really was. Being able to say that I took a mekoro tour of the Okavango Delta, however, is priceless and an experience I am glad I had. We did see a few animals, zebras, an elephant, and reedbucks, but traveling only a foot or so above water level through miles of tall reeds, really limits the number of animals one is able to see. Alright, enough about that, let's get back to talking about what I really care about...the volunteer work and the people.
On Sunday, we spent the day at Motswe Wa Tsholofelo hanging curtains and decorating the walls of the meal time area. Getting that room usable and welcoming was one of Sara's main mandates during her placement and I was thrilled to have the opportunity to help. 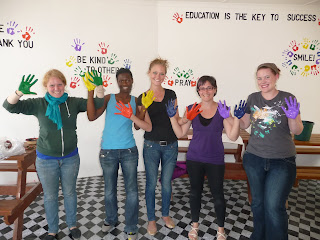 To conclude this post, I'm going to tell you how much I want to stay in Africa, volunteering - forever. If money was no object, that is exactly what I would be doing. There are so many projects here that need one simple resource...human capacity! I urge each and every one of you who reads this to volunteer abroad. Whether it's Africa or somewhere else, leave the safety and comfort of the box you call home behind and experience another part of the world first hand. At the very least, look past the images provided to you by the media and educate yourself about the reality of places of like Maun and the beautiful people that make their existence there.
Posted by ~Brandy~ at 2:35 AM