Around the World in 80 Days (Audio Book) by Jules Verne 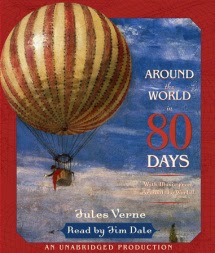 I've always been intrigued by this story, perhaps because I've always had a touch of wanderlust in me. When I happened upon the opportunity to download this audio book version for free, I couldn't pass it up, plus it counts towards to The Book Riot 2015 Read Harder Challenge!

Around the World in 80 Days was originally published in 1872 (1873 in English), but I think Phileas Fogg may still be the best character name in literary history. Can you think of a better one?

The story tracks Phileas Fogg and Passepartout from London, England to Paris, France to Turin, Italy to Brindisi, Italy to Suez, Egypt to Bombay, India to Calcutta, India to Singapore to Hong Kong, China to Yokohama, Japan to San Francisco, U.S.A. to New York, U.S.A. to Liverpool, England and finally back to London. Throughout the journey they travel by steamer ships and sail boats, trains, an elephant, and a sled (with sails). I'm not really sure why the image from the Listening Library's website has a hot air balloon on the cover. I suppose it's likely because of the popularity that the 1956 film version of the novel, in which a hot air balloon is used at one point, brought to the story. During the entire story the listener wonders whether Phileas Fogg is actually guilty of the theft he's being accused of and whether or not he'll actually make it around the world in eighty days! I won't spoil either one for you in case you haven't read/listened/watched it.

The novel provides historical, political, geographical, religious, and cultural facts about many of the countries visited: India, Singapore, China. A lot of these details include the colonial effects of Britain, its benefits and its detriments (such as the supply of opium to Hong Kong). Every time the local natives were depicted as savages (especially the Sioux in the U.S.A.), I shuddered, but had to remind myself that Around the World in 80 Days was written in the nineteenth century. At the end of the audio book, Tim Dutlow, publisher of Listening Library, provides a nice explanation of Jules Verne's background including his lack of cultural and religious knowledge. I thought that was an appropriately added touch.

One of my favourite parts of the book is when the train crossing the U.S. has to wait for a herd of bison. I couldn't help but chuckle at the irony that only our fast-paced society would appreciate. How much do you despise waiting for a train to cross when you're trying to get somewhere?

Of course, the wanderluster in me was most interested by all of the places Phileas Fogg encounters on his around the world route. If you're not all that intrigued by the places, you might want to skip this list! Mokha, Yemen is seen from the Mongolia between Suez and Bombay and the travelers make a stop in Aden (Steamer Point), Yemen for refueling. As they approach Bombay, the Islands of Mumbai Harbour (including Salsette, Elephanta, and Butcher) are noted. On the way to Calcutta, the train stops momentarily in Burhanpur. The railway stops in the small hamlet of Kholby and the travellers must find alternative transit (which ends up being an elephant) to Allahabad where the rail begins once again and proceeds to Calcutta. After a brief stop at Banaras (Varanasi), the group arrives in Calcutta. After Hong Kong they have an unexpected stop in Shanghai before making it to Yokohama. Across the United States a number of cities are mentioned: San Francisco and Sacramento in California, Reno in Nevada, Ogden City in Utah, Green River in Wyoming, Fort Kearny and Omaha in Nebraska, Chicago in Illinois. There is one shout out to Canada as the Henrietta passes the coast of Newfoundland and just as the travellers are about to complete their journey, they must stop briefly at Queenstown and Dublin in Ireland.

The audio book is just under eight hours long and narrated by Jim Dale. He does a fantastic job with the characters' voices. Each chapter includes music for the first few minutes that sets a nice tone for the rest of the narrative. For instance, Chapter 10, taking place in Bombay, begins with lovely Indian music; Chapter 19, taking place in China, begins with vibrant Chinese tunes; Chapter 23, taking place in Japan, incorporates some beautiful Japanese music. One more added benefit of an audio version of a book is the sound effects. There are pounding horse hooves, chugging trains, gun shots, and every sound you can think of really!

This is the first audio book I have listened to from start to finish and I have to say that I really enjoyed the experience and the book. Right at the end of the recording, narrator Jim Dale speaks to the benefits of audio books for children: "Try pressing play on an audio book," he suggests, rather than turning on the television. I think I may take his advice for myself!

I have to look past the cultural insensitivity of this 1872 publication and give Around the World in 80 Days 5 stars!