After reading Book Riot Contributor Rah Carter's article, "Missed LGBT History Month? There's a Book For That," I immediately ordered Transgender Warriors: Making History from Joan of Arc to Denis Rodman by Leslie Feinberg. I wanted to read it primarily for my own interest and lack of knowledge on the subject matter and secondly because it would fit two categories of The Book Riot 2015 Read Harder Challenge: Challenge 5 - A book by or about someone that identifies as LGBTQ and Challenge 10 – a microhistory. Actually, come to think of, it would also fit Challenge 6: A book by a person whose gender is different from your own.

I haven't learned this much from a book in a long time and that's saying a lot considering I'm a Master's of Arts student in English Literature. It's only fitting to quote Feinberg in explaining what Transgender Warriors is about: "It is a fresh look at sex and gender in history and the interrelationships of class, nationality, race, and sexuality." Feinberg explains the difference between transgender and transsexual and lists a whole host of terms that fit within the definition of "transgender." As Feinberg struggles to come to terms with identity and treatment by society in general, readers go on a historical journey through an often hidden, but highly non-heteronormatively sexualized past. My heart hurt many times over as the microhistory moved into the more recent realms of patriarchy and capitalism that lead to the disgusting treatment of transgender people that sadly still occurs today. Don't get me wrong, as a society we have come a very long way, but we still have a very long way to go.

As I read personal statements like, "People stare at me wherever I so. Some who gawk at me shift between seeing me as a very feminine man and extremely masculine woman. I unnerve them because they can't determine my sex," it really hit me how much a person's gender is simply irrelevant. Feinberg includes a quote from Craig Hickman, poet and performance artist, that says "I often am seen by people as a 'What's that?' to which I usually respond 'Isn't beautiful enough?' We are attracted to people, to personalities, and even though physical attraction is very important, why - really - is the gender associated with any one characteristic important at all?

If I had to choose only one thing that had the most impact on me from this book, it would be the realization that language is so very restrictive. "Language can't be ordered individually, as if from a Sears catalog," writes Feinberg. I have a number of friends, colleagues, and acquaintances that could be labelled under one or more of the LGBTQ category. I have a best friend who is currently doing graduate studies research on bisexual female youth in sport and one of the most difficult parts of the research is finding people who are willing to label themselves. And really, who can blame them?

You may have noticed that I avoided using any gendered pronouns in this post, or maybe you didn't. Either way, the point is that writing ungendered can be done! After all, why should we define ourselves by a pronoun?!

I haven't been able to get the ideas of writing ungendered and reading about ungendered characters out of my mind since I read Feinberg's book. I did a quick internet search for books that contain gender-neutral characters and was pleasantly surprised at the results. Here are just a few I plan to add to my TBR list:

Lock In by John Scalzi

This is a Sci-Fi novel that follows the story of two police agents, Chris Shane and Leslie Vann (two obviously gender-neutral names), twenty-five years after the outbreak of a contagious virus that causes one percent of its victims to become "Hadens" - fully alert humans who are unable to respond to stimuli or move. Main character, Chris Shane - whose gender is never revealed - is a Haden investigating the murder of a fellow Haden. An "Integrator" is someone who can allow a Haden to use their body which is how agent Shane functions. I actually think I'm going to check out one of the two audio-versions of Lock In, either the one narrated by Wil Wheaton (pretty cool, right?!) or the one by Amber Benson (also cool).

This one is YA Fiction and tells the story of sixteen-year old Kid (clearly gender-neutral). Kid's life on the streets of Brooklyn is full of adventure and love and the gender of the main character nor the lover, Scout, is ever revealed. YA is typically a genre that never really seems to be able to capture my interest, but this novel and its ungendered characters has already peaked mine. 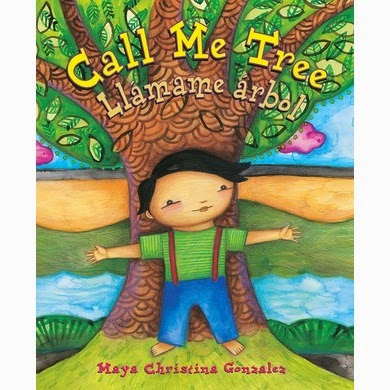 Of all the books that came up during my search, this colourful work of Children's Literature is the most intriguing. I say that because it is a children's book and if we are going to start changing the conversation about gender and its arguable lack of importance, then the best place to start is with our children. Gonzalez' main character obviously goes by the name Tree and the story explores the idea of why someone is called he or she and the assumptions made when calling someone by a gendered pronoun. I may be an adult, but Call Me Tree is definitely a book I want to add to my collection and introduce my own children to (whenever that day comes).
Posted by ~Brandy~ at 11:35 AM