The Dangers of Living in Africa

Alternate title: Why You Should Always Buy The Suggested First Aid Kit 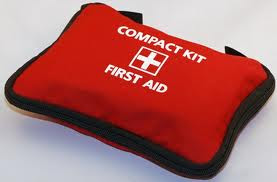 Upon planning to volunteer abroad, I was given a list of suggested things to bring along on the trip. One of these things was a first aid kit. I contemplated not buying one, because, I mean really, what would I need a first aid kit for? It just so happened that upon buying some cargo-type pants, I spotted travel first aid kits that were relatively inexpensive and after a brief consultation with my mom, decided it couldn't hurt to take it with me. Into my suitcase it went. I was pretty sure I would never even open it.
Let's jump ahead about 5 weeks now to June 14 at approximately 8 p.m. My roommate, Angela, usually does the cooking and I do the cleaning. It's not that I can't cook, I just prefer not to. She likes to cook so it works well. On this particular night, Angela had some other things to take care of which required her to be out of the house. I could have waited for her to return, but I wasn't sure how long it would take and, after all, I can cook. So I got some chicken out, put it in the oven, cut up some vegetables, started reheating some rice; life was good. Upon checking the chicken, I realised I had the oven on broil, not bake and one of the pieces was burnt. That was the first "shit" moment of the evening. Ok, no big deal, just get another piece of chicken out.
Before I continue, a little background information on the chicken is required. It was frozen crispy chicken schnitzel (incredibly delicious as a side note) but the freezer at the grocery store does not really keep things all that frozen. With that said, the pieces of chicken were slightly thawed allowing them to stick together.
Alright, now on with the dangers. The last two pieces of schnitzel were frozen together so in order to cook them, I needed to pry them apart. Easy right? - WRONG! Out came a knife and I proceeded to attempt to pry them apart. I say attempt, because I never did get them separated. Instead, the knife slipped and plunged its way into the meaty part of my hand just below my thumb. I have no idea where the knife ended up or the chicken for that matter; all I know is I dropped them, squeezed the skin on my hand together to attempt to stop the bleeding, turned the elements on the stove off, and went to my bedroom/bathroom to assess the situation.
It wasn't gushing blood, so I figured that was a good sign. I washed it and thought to myself, 'What the hell am I going to do now? Do I need to go to emergency? Can I handle this alone? Am I going to pass out?' Then, in the midst of what I am pretty sure was at least mild shock, I remembered my first aid kit; the one I almost didn't buy; the one I was sure I would never need. I pulled it out, unzipped it, and found butterfly stitches! Two butterfly stitches, a dab of Polysporin, a bandage, and an Advil for the pain and I was set...maybe. In the morning I was still pretty frazzled and after cleaning the cut again with antiseptic wipes (from my first aid kit) this time, I once again returned to wondering if I needed stitches.
I decided I better go to a doctor of some sort. I called a cab, went to the clinic we were shown during orientation, waited about an hour and a half and saw the doctor. He took a close look at it through a magnifying glass, told me I was lucky it wasn't worse, put some cream on it, bandaged it up, and sent me on my way. NO STITCHES!
So now, with all of that said, ALWAYS buy the suggested first aid kit because you never know what dangers lurk around the next dinner table.
Posted by ~Brandy~ at 2:47 AM