Pleasantries and Perturbances in Pretoria 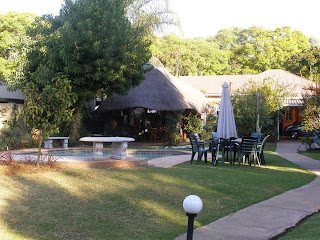 We really couldn't have asked for a much nicer hostel for the $20 a night that we paid. Our first night the power went out and even though we are in Africa, we are far enough south that it gets damn cold here at night, like see your breath, below zero cold! I know we are supposed to be tough Canadians, but at night, if not dressed properly, we freeze our temporarily African asses off! With the power out, the little heater in the room wasn't working so we bundled up in layers of clothing, climbed under layers of blankets (2 folded in half, so technically 4) and dreamed of the hot African sun! Our second night the power went out - not cool South Africa - not cool at all! Thankfully, our third night, we had lights, internet, and HEAT! I actually didn't have to sleep in my slipper boots and two fleece sweaters.
Dinner, Hooka, and The White Box - After finally arriving in Pretoria on Thursday and settling into our hostel, Angela and I decided to take a walk and explore Hatfield (the area around our hostel known for its restaurants and bars). We had some yummy pasta at Mimmos Restaurant where the drinks were two for one and the chocolate brownies were served warm with ice cream! Our next stop was a Moroccan Hooka Cafe where, at 27 years old, I willingly inhaled tobacco into my lungs for the first time. It was melon flavoured and I only got a small head rush once. And now for The White Box! We contemplated, momentarily, walking (about 10 minutes) back to our hostel after our evening out. If walking at night in Gabs is not recommended, walking at night anywhere in South Africa (including Pretoria) is definitely not recommended. After being followed about a block by a man saying "Thank you Ma'am for the white box" over and over and over again, we decided we better call a cab. The white box, you see, was my leftovers from Mimmos and there were just so many men begging on the streets. While it was really quite sad, it was also very frightening. We put the "white box" in Angela's purse and waiting outside a brightly lit restaurant for a taxi to take us to the hostel.
Pretoria Art Museum, Union
Buildings, and Fleecies - Friday we got up, had a little breakfast and headed out. It took us about 45 minutes to walk to the Pretoria Art Museum and we just so happened to walk down one of the streets where a number of embassies were located. Pretty cool to see if I do say so myself. The art museum was small, but interesting. Being the nerd that I am, I plan to look a little more into both Township and Resistance Art, two areas that really interested me while touring the gallery. 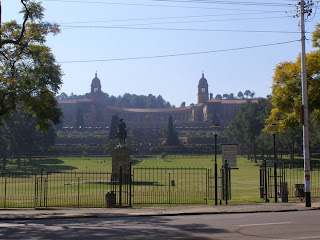 Our next stop was the Union Buildings which were a fine site to see. I decided that they are best described as a glorified mix of Ottawa's Parliament and the International Peace Gardens. We got a little lunch and relaxed for a bit in the park that surrounds the buildings. The park actually reminded me a bit of Central Park in New York (albeit on a much smaller scale), a beautiful green space in the midst of a huge city. After some reading in the park, we took the jaunt up the steps as high as we could go and took in the magnificent view of Pretoria. 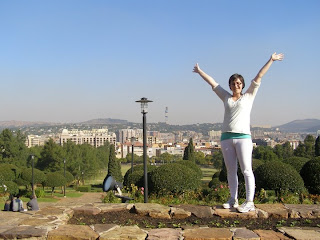 The entire place is basically dedicated to World War I. I'm not sure exactly why, but I am sure I could be a bit more knowledgeable if I just did a little research. Maybe someday... To end our second (or first full) day in Pretoria, we stopped at Hatfield Square where we bought warmer clothes a.k.a. fleecies. Well, I bought a fleecy, Angela bought some warm pants and a few sweaters too, but by far the best purchase we made: the boot-style slippers for about $10! So comfy and so warm. We also bought some scrumptious food to cook for dinner, but we soon arrived back at the hostel to find that the power was out for the second night in a row. Sigh...and deliver it was - which, by the way, is a genius idea, one delivery company and about ten different restaurants to order from. You call the one company, place your order with them and they take care of the rest. It's brilliant!
The Cradle of Humankind -
For our second full day in Pretoria we decided to 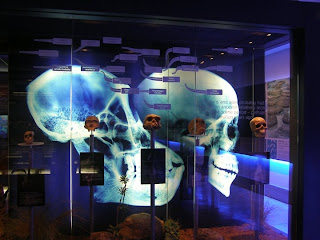 book one of the tours that the hostel offered to coordinate for us. We decided the Sterkfontein Caves and the Maropeng Museum, all part of the Cradle of Humankind, sounded pretty interesting. "Interesting" really doesn't even begin to describe the day we had. It was brilliant, magnificent, and every other word like those that a thesaurus could come up with! The basic idea behind the entire set up is to educate people on the evolution of the human species. I knew quite a bit about evolution prior to visiting the museums and caves, but it was still fascinating. Our guide was great, and despite the ridiculous questions 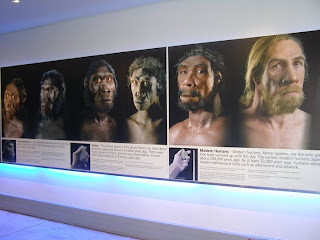 (Do you believe in God? How did people breathe back then, like was there air? How do you know they cooked their food?) and comments (I'm still not buying any of this) from certain people in the group, the tour was truly indescribable...guess you're just going to have to come to Africa and see it for yourself! Basically, we climbed down about 60 metres and briefly toured through one of the main caves. There are thirteen total in the Cradle of Humankind. In short, we saw where fossils were found; we saw casts of famous fossils; and we were really just in awe of the sheer magnitude of the caves and the historical timeline of our species.
The last part of this post will encompass our wonderful (written sarcastically) bus trip back to Gabs. About an hour out of Pretoria, we pulled over on the side of the road because we had mechanical issues. After waiting for around an hour, a mechanic (or so they say) showed up, did what I think was nothing, and we got back on the same bus. Another half hour or so into our journey we pulled into a small town where we, once again, got off the bus and this time waited another hour and a half or so for a whole new bus. Fun times! At this point we were also told that "normally" the bus makes it across the Botswana border before it closes at 12 midnight. "Normally?" - so there was a slight chance we would have to spend the night at the border if the new bus didn't hurry itself up. THANKFULLY (yes, capital letters are required) the bus didn't take long and we made it home to Gabs around 11:30 p.m. only about 2.5 hours later than we were supposed to. It could have been worse; we could have spent the night in the bus at the border!
Ok, so I lied; before signing off for good, I just have two more little B-bits to share.
1. We met this incredible couple, Oksana and Arlo, at the hostel. Oksana is originally from Russia, but, after doing a high school exchange in Alaska, decided to go back and do her university degree there. While doing that, she met Arlo and the two of them have been in Alaska together ever since. So what is so incredible about this couple you might be thinking? Well, let's see. Almost a year ago, they quit their jobs, sold most of their possessions, and decided to take a trip - Around The World! When we met them they had been through the U.S. and South America and were making their way through Africa to move on to Australia and New Zealand. Eventually, they'll end up in Russia and decide at that point whether they can afford to tour Europe. To say the least, I was in utter and total awe. It does get better (if you can imagine anything better); they are video blogging about it: Postcard Valet. Just one more thing about them because I really can't get enough of their story; they have budgeted to travel on $100 a day. Let me just say...I hope this is me and Brendan in 5 years time. Let the saving begin!
2. Ok, last thing, I promise. 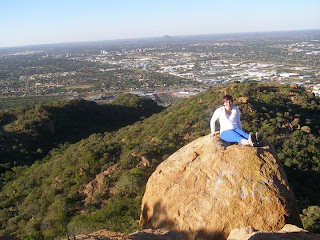 That's me sitting out on a rock at the top of Kgale Hill. The "hike" was more like a mountain climb. It was hot. It was sweaty. It was so worth it. Behind me you see a decent part of Gaborone and, again, the photo just doesn't do the view any justice whatsoever.
Posted by ~Brandy~ at 12:31 AM