As much as my time in Botswana is about the volunteering I am doing here, I also manage to find time to travel at least a little. Last weekend found me in a rented van with 2 of my roomies, 2 good Batswana friends of ours who happen to be amazing dancers, and two hired drivers (also the cousins of one of our friends). We were heading to Johannesburg in South Africa for a dance competition of which our two friends would undoubtedly be the stars.
The drive there was a little tense at times considering it was dark, our driver was a bit inexperienced (or something), and the highway was way worse than any I've experienced in either Manitoba or Saskatchewan (Canadian joke, sorry to anyone who's a non-Canuck). 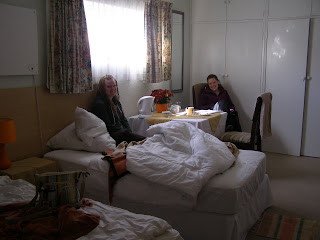 You really cannot imagine how thrilled we (those are two of my roomies, Emma and Angela) were to find out that our B&B was a little slice of paradise - a rather chilly paradise, mind you - but paradise none-the-less. We piled on the blankets, tucked ourselves in, and before we knew it, our alarm awakened us for our first official day in Joburg. Up 'n' at 'em , a nice hot breakfast, and out the door to head to Soweto (a name formed from South Western Township) where the dance competition was taking place. Soweto is the biggest township - which is basically a nice name for a slum - in South Africa, or perhaps in all of Africa; I'm not too sure on my facts there. What I am sure about is that Soweto was formed during the Apartheid as a place for the black people to live apart from the white people. It's really only expanded since then and while it's rather well developed now, the remnants of what it used to be are still fully present. The houses (which are better than shacks, but not much) are small and so closely packed together that it would be difficult to walk between them. It is also still very dangerous and although I wasn't there long enough or out and about enough to see the poverty first hand, I do not doubt that it exists in abundance in Soweto.
Moving on...the big plan for Joburg, in addition to the dance competition, was to make it to the Apartheid Museum. Other than being one huge city, Johannesburg really doesn't have much to offer except this widely acclaimed museum which showcases the depressing history of the country. Our friend's aunt assured us she knew where it was (close to the hall that the dance competition was being held in) and she had no problem taking us there. We were pumped. Where we actually ended up, however, was the Hector Pieterson Museum which only showcased one devastating event (the death of Hector Pieterson) that occurred as a result of apartheid. It was informative if nothing else and therefore not a complete bust.
Now for the dance competition. We knew it would pretty much be an all day thing. We knew that it likely wouldn't be on schedule (because nothing is here). What we didn't know was that being "behind schedule" meant 8 hours behind. The entire competition was supposed to end at 4 p.m. We left at 11:30 p.m. after finally seeing our friends dance. If we had been able to watch Tshepi and Mike dance more often throughout the day, it would have been phenomenally better. Instead we watched the same groups of young and inexperienced ballroom dancers over and over and over again. Now don't get me wrong, I love dancing. I love any and all forms of art. I even liked watching the dancing for the first few hours, but by hour 5 or 6, I really just wanted to cheer on our friends and back to the B&B to rest. Seeing Tshepi and Mike Samba, Cha Cha Cha, Rumba, and Jive pretty much made up for the long day of sitting in the bleachers though. They were fantastic and if Botswana had better resources for the arts, I am sure they'd both be famous professional dancers.
Take a look for yourself - Tshepi and Mike Dance the Jive:
In short, Joburg was gigantic, fast-paced, and the random people that I passed on the street weren't nearly as friendly as the ones here in Botswana. I can honestly say, I missed the quiet life in Gabs last weekend and was glad to arrive back "home" on Sunday.
Posted by ~Brandy~ at 5:32 AM