A Discovery of Witches by Deborah Harkness

Before I write anything about this book I have to thank Carolyn from Riedel Fascination for creating the Ethereal 2015 reading challenge. I don't know if I ever would have picked up A Discovery of Witches if it wasn't for the theme of this challenge. The genre is not what I typically spend much time with. The last novel I read for the challenge featured unicorns (a creature I'm fascinated by) and this time I chose witches (another ethereal interest). What I didn't know when I picked up A Discovery of Witches is that I would be reading about not only witches, but vampires, deamons, ghosts, and a house that is more than haunted, but, rather, alive. 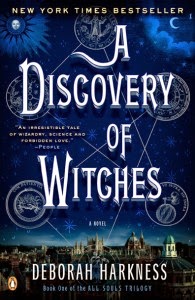 In the first book of her All Souls Trilogy, Harkness gives readers a story of forbidden love reminiscent of Romeo and Juliet. Juliet a.k.a. Diana is a witch descendant from Bridget Bishop, the first person executed in the Salem witch trials. She has suppressed her powers for her entire life and much of her story involves her journey to acceptance and mastery of those powers. Romeo a.k.a. Matthew is a 1500 year-old vampire. Both exist naturally and blend into human society, coming together in Oxford's Bodleian Library over an ancient, bewitched manuscript Ashmole 782 and initially despise each other. After all, vampires and witches are sworn enemies. The mystery behind Ashmole 782 is the driving catalyst for the entire plot, bringing other vampires, witches, and demons into the story as they all seek the manuscript. As the only one able to access the spellbound book, Diana soon becomes the target of each of these dangerous creatures. Matthew's increasing desire to protect Diana is inevitably what brings the two closer.

A Discovery of Witches is an intelligent collection of history, academic intrigue, and myth. Harkness creates beautiful descriptions such as her explanation of Ashmole 782 as a palimpsest with once washed off ink reappearing under new text as if it were a textual ghost. The palimpsest image then occurs again, 350 pages later, in an image-evoking description of Matthew's body: "its bright surface obscuring the tale of him hinted at by all those scars." The most unique aspect of the novel has to be the house belonging to Diana's Aunt's Sarah and Emily (both also witches). It is not only haunted by a number of deceased relatives that come and go depending on the situation that arises within the walls, but the house has a mind of its very own. It closes, opens, and locks doors; creates new rooms for visiting guests; hides precious objects until they are needed; and any number of other strange and fascinating activities.

If I am to provide some criticism it would be that A Discovery of Witches is basically Romeo and Juliet meets Twilight meets Fifty Shades of Grey. (In Harkness' defense, though, the last title in that list was published after A Discovery of Witches.) Despite the fact that Diana is a strong and independent female character, Matthew still takes on the protector or knight-in-shining-armour role that is so typical of love stories. It was rather disappointing when it became clear that Diana would inevitably take on the role of damsel-in-distress. Near the end of the novel, there is a subtle jab at Shakespeare that doesn't sit quite right, suggesting that the famous playwright was a magpie collecting other writer's stories. Demeaning the most famous playwright in history is a bit harsh coming from an author who has just written a contemporary version of Romeo and Juliet herself.

What is wonderful about A Discovery of Witches and places it outside the confines of being labelled "just another forbidden love story" is that it asks for acceptance, but not just acceptance for the two lovers, an all-encompassing acceptance of all species (or races) by all others. The novel is a page-turner no doubt and as Diana and Matthew timewalk back to the 1590s for Harkness' second novel of the trilogy, Shadow of Night, the historical-fiction lover in me is definitely intrigued. I'm also curious to see how Shakespeare will fare through Harkness' eyes during his own time period.

Overall, A Discovery of Witches is getting 4 stars and a glowing (of the witch variety) recommendation!
Posted by ~Brandy~ at 2:33 PM