Into the Land of the Unicorns by Bruce Coville 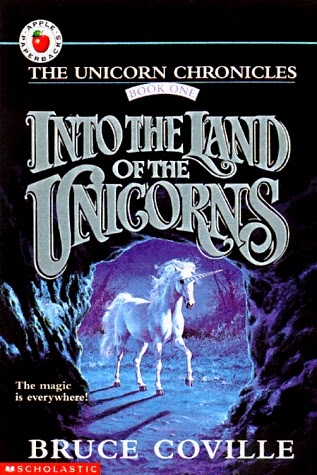 I think I've owned Into the Land of the Unicorns for close to twenty-five years. I'm venturing to say that I ordered it from a Scholastic book order in elementary school. It's young adult fiction, but I was reading well above my age level as a youngster so I'm thinking Mom would have bought this for me before I was ten. I dug this out of my youth-book-box when I found out about Riedel Fascination's Ethereal 2015 Reading Challenge. If I had to choose a favourite ethereal being it would be the unicorn; in fact I often tell people it's my spirit animal!

Coming back to visit this book after so many years was a lot of fun. I don't have a lot of interest in YA literature and, to be honest, this book didn't help to build that interest. It is a lovely read, though, and once I got into it, the story did captivate me enough to read the last fifty pages non-stop. Into the Land of the Unicorns is a magical book filled with vibrant detail like this description of the ethereal creatures themselves: "In shape, he was much like a horse, though somewhat smaller and more finely built. His hooves were cloven, like a goat's, rather than solid like those of a horse. Mane and flowing tail seemed spun of silver cloud and moonlight. From between his enormous dark eyes thrust a spiraled horn, three feet long at the least, that glowed as if lit from within." Beautiful!

The story follows a young girl, Cara, from the human world to Luster, the land of the unicorns, where she along with a group of unlikely companions treks through dangerous country to return a powerful amulet to the Queen. Of course, they hit some bumps along the way. What fun would a fantasy be if good did not have to conquer evil?

By far, my favourite character is the Squijum, a rambunctious cross between a monkey and a squirrel who says things like: "Now now shake butts move feet hotcha get going." As a book lover, my favourite scene in the book occurs when the group reaches the home of Grimwold, keeper of the Unicorn Chronicles. He has a room called the Story Room described as follows: "Books, scrolls, stacks of paper, notebooks, pens, and pots of ink seemed to cover every available surface - of which there were many, since the room held five long, low tables. The dark wooden walls were lined with with maps, pictures, and intricately woven tapestries." I would love few things more than to live forever in that room. Wouldn't you?!

I'm really glad I revisited this book and I actually wouldn't mind reading the other three books in the series. Since YA fiction isn't really my forte, though, I'm giving this book a three star rating.
Posted by ~Brandy~ at 7:53 PM