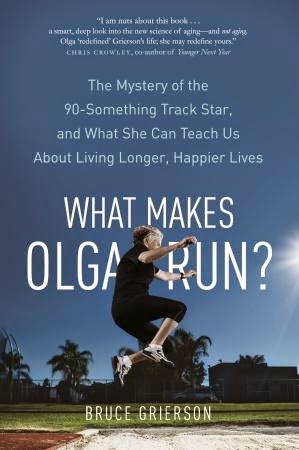 What Makes Olga Run? was my first book purchase of 2015. I can't go into a bookstore without buying a book so I used The Book Riot 2015 Read Harder Challenge as an excuse. I saw this on a table donning a sign that said something along the lines of "Motivational Reading" (I can't remember exactly what it said). I immediately thought of Challenge 24: A self-improvement book (can be traditionally or non-traditionally considered "self-improvement"). I'd say What Makes Olga Run? straddles the line between traditional and non-traditional.

Like the book cover says, Olga Kotelko is a 90-something track star. She competes in eleven track and field events as a Masters Class athlete around the world. She holds twenty plus world records and over six hundred gold medals. Olga laughs in the face of old age. I adored her and her story for those reasons, but also because she is Ukrainian and grew up a rural Canadian prairie girl. I, too, grew up a rural Canadian prairie girl, have Ukrainian ancestry, and I like to run! We were a match meant to be.

The book is basically Bruce Grierson following Olga through a few years of her life. Olga agreed to it, of course, but she also agreed to much more for the sake of the book. Medical doctors and research specialists throughout Canada and the United States run a barrage of tests on Olga in an attempt to figure out how she has defied old age. They all hope that Olga is their ticket to determining a formula to produce the fountain of youth. The book gets a little bogged down with names of doctors and specialists, their accreditation and the institutes or facilities they work for, and the medical terminology that comes along with a study of the body. All of that makes for a bit of dry reading at times, but I can understand the need to give credit where credit is due.

To answer the book's title question, what makes Olga run?, Grierson records expert analyses of genetics, lifestyle, attitude, personality, training methods, habits, and motivation. All of the findings are incredibly indepth, but at the same time speculative because Olga is only one person. The doctors and specialists involved all come to the same conclusion; they need more people of Olga's age and agility to test before anything concrete can be known for sure.

The overall message that the book offers, though, is also the answer to why Olga has lived so long: exercise. Grierson includes the results of a study done by Harvard epidemiologist, Ralph Paffenbarger: "Every hour of exercise we do amounts to two hours tacked onto our lifespan" (64). Olga's message to readers is similar: "rise up off your butts, people, and you will feel better and live longer" (217). That seems like a simple message, and I suppose it is. What Makes Olga Run?, however is far from being a simple book. Grierson does a thorough job of documenting the research, but also of recording Olga's life as a Masters Class athlete. The book is both scientific and personal and I'll give four bright stars as a rating of Grierson's efforts to combine the two.

Both Grierson and Olga are Canadian so I'm also crossing off the "A Work of Non-Fiction by a Canadian Author" square on the Reading Bingo Challenge.