Penises Can Be Quite Poetic

If you have been following along with me on The ABC's of Swearing throughout the month of May you'll be well aware of the fact that I have a teeny tiny gigantically enormous problem with aspects of the male and female anatomy (namely the sex organs) being deemed "vulgar".

Today's letter is 'P' and there are so many so called "offensive" words that begin with this innocent letter that I just don't know where to start. Penis, Pussy, Prick, and my favourite...Poonanny! Who wouldn't want to call a vagina a poonanny? It's such a fun word to say: poonanny, poonanny, poonanny (fun, right?!).

One of the reasons I fell in love with English literature studies (I wrote all about it through the A-Z Challenge) is because of the wide range of open-mindedness that I was presented with and in turn able to express. The freedom of words is miraculous and another reason why I don't feel that any of them should be deemed "taboo" for any reason whatsoever. I wrote the following poem for a third year English class that I took quite a few years ago now, but that class and this poem, which I presented with full colour slides to accompany it at the Senior Students' Colloquium in front of my fellow students and professors alike, has stuck with me and made a significant impact on my way of thinking. It's inspired by the genius bpNichol and his poem, "The Vagina".

My dad has one. I started out as the twinkle in his eye, shot through his heat-seeking love missile, and ended up a star! - so the story goes.

I used to think having one would be easier. Periodic calls to attention, the odd damp awakening. I could deal with that if it meant I could unzip and pee anywhere, anytime. Oh - the freedom!

Dickens, Milton, Shakespeare. I guess they each had one. I guess that's why it's call the canon. The power of the Pen-is in the literary world.

Once upon a time a prick name Chode and a cock called Schlong, took a ride on the Baloney Pony. For lunch they ordered Beef Bayonet and Pork Sword with a side of Weiner. To be continued...

Jimmy, Johnson, Willy, Peter. I knew one of each. They were and likely still are - dicks!


With the crumble of concrete and incurable misfire, now I'm glad I don't have one. I'm quite content sitting and from time to time borrowing one just for fun. 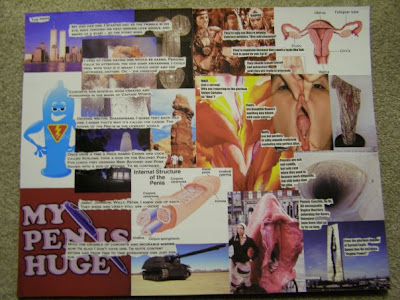 This is a collage of the images I used on the slide show when I presented "The Penis". As you can see, the other side of the collage presents vagina images and their associated poem, but I'll leave "Vaginas" for V day.