Every 'Z' post must contain reference of some kind to Zombies; it's one of those unwritten rules (or something), so...

Holy zombie balls, The ABC's of Swearing is over (and my final post is only 2 days late); now what excuse will I have to use profanity in my everyday writing? But that's precisely the point, right?!, that we don't need a reason or need to make excuses for what we write. We shouldn't have to put disclaimers on everything that might offend someone if it's supposed to be free speech (or writing). Open up your minds (but be careful, because that gives the zombies easier access to your brains).

If you've been following along at all or even stopping in from time to time you should have picked up on the fact that I have absolutely zero tolerance for the reality that almost all terms that are used to refer to the parts of the male and female anatomy used for sexual acts are deemed "profane", "vulgar", "offensive". Get a brain (for the sake of the zombies), people! If you haven't already, take a look at Penises Can Be Poetic and Voicetrous Vaginas for a look at the magnificent multiplicity by which male and female genitalia can be called. The title of the project showcased in those two posts is "Dispelling the Taboo" - how do you think I did?!

You may also have noticed that I have zero tolerance for slut shaming and suppressing the female orgasm.

In short, I have zero tolerance for a lot, including irrational fears of an impending zombie apocalypse. Just embrace that shit, people and if you can't kill 'em (because you aren't on MM's MoFo-in' Zombie Apocalypse Survival Team) then join 'em. Stay away from me though; I'll shit stomp your zombie ass! 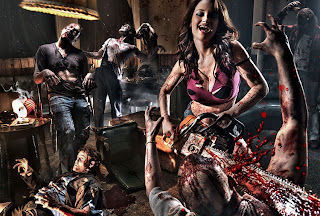